The Real Winner of the Afghan War? It’s Not Who You Think. 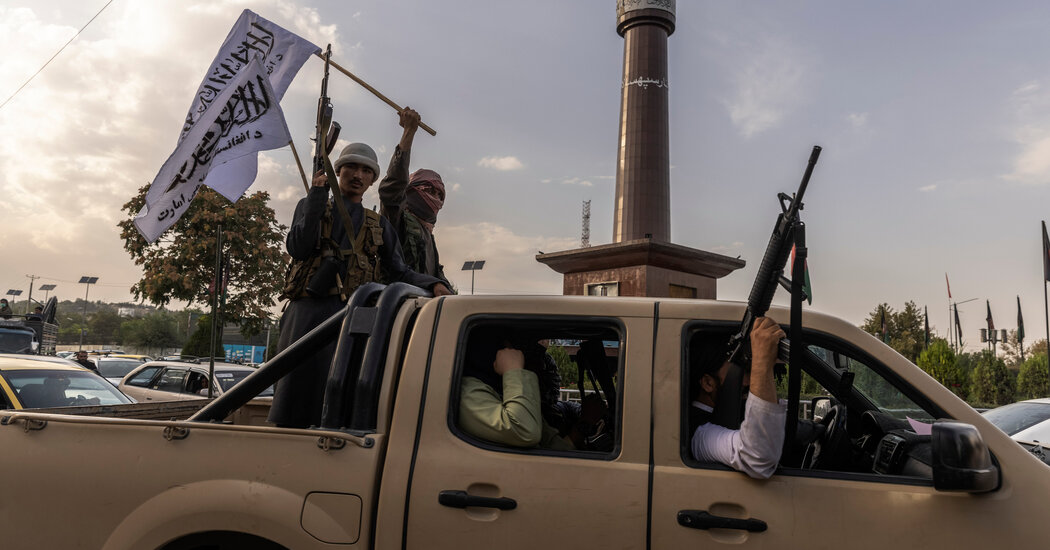 Just days after the Taliban took Kabul, their flag was flying high above a central mosque in Pakistan’s capital. It was an in-your-face gesture intended to spite the defeated Americans. But it was also a sign of the real victors in the 20-year Afghan war.

Pakistan was ostensibly America’s partner in the war against Al Qaeda and the Taliban. Its military won tens of billions of dollars in American aid over the last two decades, even as Washington acknowledged that much of the money disappeared into unaccounted sinkholes.

But it was a relationship riven by duplicity and divided interests from its very start after 9/11. Not least, the Afghan Taliban the Americans were fighting are, in large part, a creation of Pakistan’s intelligence service, the I.S.I., which through the course of the war nurtured and protected Taliban assets inside Pakistan.

In the last three months as the Taliban swept across Afghanistan, the Pakistani military waved a surge of new fighters across the border from sanctuaries inside Pakistan, tribal leaders have said. It was a final coup de grace to the American-trained Afghan security forces.

“The Pakistanis and the I.S.I. think they have won in Afghanistan,” said Robert L. Grenier, a former C.I.A. station chief in Pakistan. But, he warned, the Pakistanis should watch what they wish for. “If the Afghan Taliban become leaders of a pariah state, which is likely, Pakistan will find itself tethered to them.”

Pakistan’s already shaky reputation in the West is likely to plummet now, as the Taliban take over Afghanistan. Calls to sanction Pakistan have already circulated on social media. Absent foreign financing, Pakistan faces reliance on a jihadist drug trade encouraged by the new rulers in Kabul. A Taliban-run state on its border will no doubt embolden Taliban and other Islamist militants in Pakistan itself.

Not least, relations with the United States, already on the downslope, will unravel further. Aside from maintaining the stability of Pakistan’s nuclear arsenal, the Americans now have less incentive to deal with Pakistan.

So the question for the Pakistanis is what will they do with the broken country that is their prize? Already Pakistan, along with Russia and China, is helping fill the space the Americans have vacated. The embassies of the three nations have remained open since the Taliban seized Kabul.

A Pakistani protégé, Khalil Haqqani, a Taliban leader who was a regular visitor to Pakistan’s military headquarters in Rawalpindi, is one of the new rulers of Afghanistan.

Known to American intelligence as the Taliban emissary to Al Qaeda, Mr. Haqqani showed up in Kabul last week at their new chief of security, brazenly armed with an American-made M4 rifle, with a protection squad dressed in American combat gear.

“Governing a war-ravaged country will be the real test and imposing challenge especially as the Taliban have been a warring force, not one adept at governing,” Maleeha Lohdi, a former Pakistani ambassador to the United Nations, wrote in a column in The Dawn newspaper this week.

During the war the Americans tolerated Pakistan’s duplicitous game because they saw little choice, preferring to fight a chaotic war in Afghanistan to warring with nuclear-armed Pakistan. Moreover, Pakistan’s ports and airfields provided the main entry points and supply lines for American military equipment needed in Afghanistan.

Pakistan did that, even as its spy agency provided planning assistance, training expertise and sometimes on the ground advice to the Taliban all through the war, American officials said.

Though Pakistan was supposed to be an American ally, it always worked toward its own interests, as nations do. Those interests did not include a large American military presence on its border, an autonomous Afghanistan with a democratic government it could not control, or a strong and centralized military.

Rather, Pakistan’s goal in Afghanistan was to create a sphere of influence to block its archnemesis, India. The Pakistanis insist that India uses separatist groups like the Balochistan Liberation Army, operating from havens in Afghanistan, to stir dissent in Pakistan.

“The Pakistani army believes Afghanistan provides strategic depth against India, which is their obsession,” said Bruce Riedel, a former South Asia adviser to the Bush and Obama administrations. “The U.S. encouraged India to support the American-backed Afghan government after 2001, fueling the army’s paranoia.”

The Pakistanis were incensed that former President Barack Obama visited India in 2015 but conspicuously boycotted Pakistan, he said.

During a visit to Washington this spring, Moeed Yusuf, the national security adviser to Pakistan’s prime minister, Imran Khan, stressed the need to eliminate the Indian presence in Afghanistan, Americans who met him said.

Mr. Yusuf is considered a moderate on the Pakistani political spectrum, and the Americans said they were struck by his vehemence on India’s role in Afghanistan.

When Indian diplomats were among the first foreigners to evacuate from Kabul, their departure was played in the Pakistani press as a singular victory.

The nexus between the Pakistanis and the victorious Mr. Haqqani was indisputable and indispensable to the Taliban victory, said Douglas London, a former C.I.A. counterterrorism chief for South and Southwest Asia.

The head of the Pakistani army, Qamar Javed Bajwa, and the head of the I.S.I., Hameed Faiz, met with Mr. Haqqani on a “recurring basis,” Mr. London said. The extended Haqqani family has long been known to live in the largely ungoverned areas of Pakistan along the Afghan border.

“All the time Bajwa was pressed by the U.S. to give up Khalil Haqqani and two other Haqqani leaders, and all the time, Bajwa would say, ‘Tell us where they are,’” said Mr. London, who has written an upcoming memoir of his C.I.A. years, “The Recruiter.” said. “My favorite quote was when Bajwa said: ‘You just have to come to my office and we will go in a helicopter and we will go and pick them up.’”

Pakistan’s help, he said, encompassed a gamut of services. Safe havens in the borderlands of Pakistan, particularly in the city of Quetta, sheltered Afghan Taliban fighters and their families. Medical services treated wounded fighters, sometimes in hospitals in the major cities, Karachi and Peshawar. Free rein for the Haqqanis to run lucrative real estate, smuggling and other businesses in Pakistan kept their war machine churning.

The I.S.I. usually kept its operatives out of the actual conflict, fearful that they might be captured in Afghanistan, delivering a smoking gun to the Americans, Mr. London said.

The I.S.I. also provided the Taliban with assets that elevated their international status. The Taliban leader Abdul Ghani Baradar traveled on a Pakistani passport to attend peace talks in Doha, Qatar, and to meet in Tianjin, China, with Wang Yi, the foreign minister.

“The Afghan Taliban would not be where they are without the assistance of the Pakistanis,” Mr. London said.

But the Obama administration never said publicly what it suspected: that the Pakistani military knew all along that bin Laden was living with his extended family in Abbottabad, one of Pakistan’s best-known garrison towns.

If Washington had declared that Pakistan was harboring bin Laden, then Pakistan would have legally been a state sponsor of terrorism, and subject to mandatory sanctions like Iran, said Mr. Riedel, the former South Asia adviser to the Bush and Obama administrations.

That would have forced the Americans to end its support for Pakistan and that in turn, would have led Pakistan to stop American war supplies from transiting Pakistan, increasing the cost of the war.

The bin Laden raid played into longstanding fears within the Pakistani military that the Americans wanted to dismantle Pakistan’s nuclear arsenal, and would violate Pakistani territory to do it.

Despite the strained relations, the U.S. continues to work with Pakistan through the Department of Energy to help provide security for the weapons, and fissile material, said Toby Dalton, co-director of the Nuclear Policy Program at the Carnegie Endowment.

But Pakistan is also agile in its alliances. China, a longtime patron of Pakistan — they call each other as “close as lips and teeth” — is investing heavily in Pakistani infrastructure.

Publicly, China says it is cheered to see the Americans exit Afghanistan, and is ready to step into the void, expanding its Belt and Road initiative into Afghanistan, where it hopes to extract minerals.

But privately, the Chinese are wary. Chinese workers in Pakistan have been killed in terrorist attacks, which could presage a rough ride in Afghanistan. And the Taliban prefer isolation to roads and dams that could serve to loosen their control on the population.

China is counting on Pakistan to serve as its facilitator in Afghanistan, said Sajjan Gohel, International Security Director of the Asia-Pacific Foundation in London.

“The Chinese appear confident that they will be able to secure more security guarantees from the Taliban,” Mr. Gohel said, “because of their mutual ties with Pakistan.”

Jane Perlez is a former bureau chief for The New York Times in Islamabad and Beijing. Reporting was contributed by Ismail Khan in Peshawar and Zia ur-Rehman in Karachi.