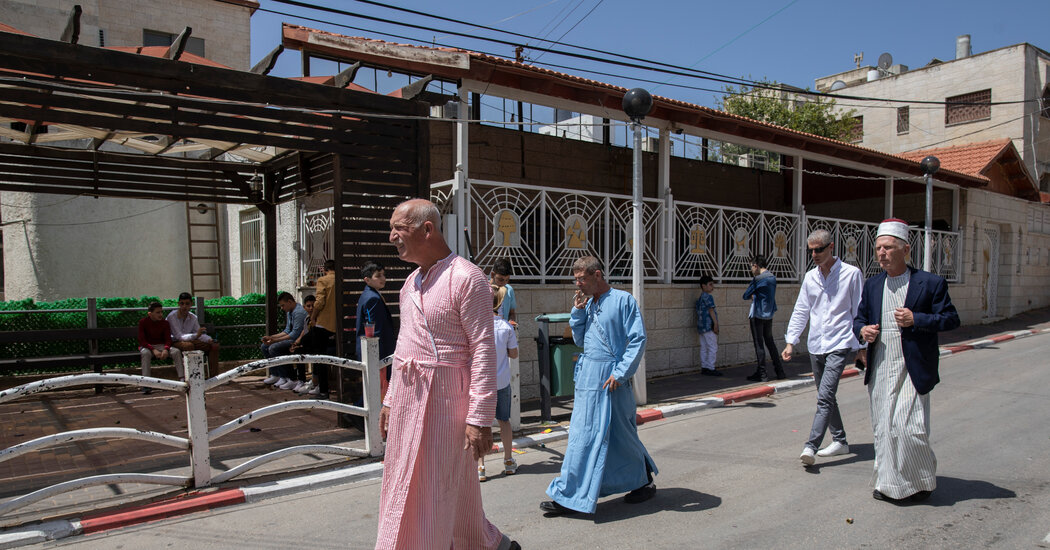 MOUNT GERIZIM, West Bank — In the occupied and largely segregated West Bank, Jews live in gated Israeli settlements and Palestinians live in Arab cities and towns. And then there are the 440 residents of the mountaintop village of Al Tor, who float between both worlds.

As children, they grow up speaking Arabic. As teenagers, they study at schools run by the Palestinian Authority. As retirees, many regularly smoke shisha in the Palestinian city of Nablus, farther down the slopes of Mount Gerizim.

But they also hold Israeli citizenship, often work in Israel, pay for Israeli health insurance and visit relatives in a suburb of Tel Aviv. In Israeli elections, several say they vote for the right-wing, pro-settler Likud party. Yet the Samaritans are still represented on the dormant council of the Palestine Liberation Organization.

So it goes in Al Tor, a five-street village, known as Kiryat Luza in Hebrew, whose beige houses are home to some of the last members of the Samaritan religion, an ancient offshoot of the Israelite faith. Their unique Samaritan identity — not Muslim, not Christian, but not quite Jewish, either — allows them to drift, sometimes uneasily, between Israeli and Palestinian societies.

Mr. Cohen drives every day to Ramallah, a major Palestinian city in the West Bank, where he works as a legal adviser to the Palestinian basketball association. But when he needs health care, he drives into Israel. When he was younger, he played semiprofessional basketball for teams from both Ramallah and a nearby Israeli settlement — a contradiction he shrugs off.

While this ability to operate in both worlds is often advantageous, it also comes with drawbacks, some dangerous.

During the second Palestinian uprising in 2001, Mr. Cohen’s father, Josef Cohen, now 76, said he survived an ambush by Palestinian militants, only to be shot minutes later by Israeli soldiers as he raced toward a military checkpoint on route to the hospital.

“I’m a terror victim on both sides,” the elder Mr. Cohen said.

Yet the complexity of the Samaritan experience also provides cause for optimism: At a time when Israelis and Palestinians feel as sundered as ever, after a war and ethnic unrest this year, Al Tor offers a paradigm that respects religious and ethnic differences, while affording its residents access to and rights within every part of the Holy Land.

By some estimates, Samaritans numbered more than a million people in the fifth century. But after centuries of persecution, their numbers have dwindled to about 800, many of them with Cohen as their family name.

About half live in Holon, on the southern edge of Tel Aviv, and the remainder live on Mount Gerizim, where they believe the prophet Abraham tried to sacrifice his son Isaac. To bolster their population, the community has arranged several marriages between Samaritan men and Eastern European women.

And forget the parable attributed to Jesus in the Christian Bible, where a “good Samaritan” helps a man who was robbed and beaten along a road.

“That’s the New Testament,” said Shachar Joshua, 71, a Samaritan and former banker who grew up in the West Bank but later moved to Israel. “We have nothing to do with it,” he added, a little gruffly.

Before Israel occupied the West Bank in 1967, the Samaritans there had no official connection to the Jewish state and spoke no Hebrew.

Josef Cohen recalls being told as a child seven decades ago about the lynching of an Israeli who had entered the West Bank. “People said he was a Jew, but I didn’t even understand what that meant,” said the elder Mr. Cohen, now a senior Samaritan priest.

“I saw myself,” he added, “as an Arab Palestinian.”

Israel later gave them citizenship, a right denied to other Palestinians in the West Bank. During a Palestinian uprising in the 1980s, some Palestinian militants increasingly associated Samaritans with the Israeli state. That forced most Samaritans to move from their ancestral homes in Nablus to Al Tor, where the Israeli Army could better protect them, or to Israel itself.

“If there was no Israel,” said the elder Mr. Cohen, “we would have no life.”

Yet Yasir Arafat, the former Palestinian leader, always maintained good ties with the Samaritan leadership, said Aharon HaCohen, a Samaritan priest who spent most of his life working for Palestinian civil institutions.

“Your father has died but you have a second father,” Mr. HaCohen recalled Mr. Arafat saying. “I am a father to you.”

The intricacies of the Samaritan identity, and the tussles over their allegiance, were visible at their annual Passover sacrifice in April. Most of the world’s Samaritans gathered in Al Tor, all dressed in whatever white clothes they could find — a chef’s overall, a dress shirt, even a lab coat.

As the sun set, this white-robed army corralled dozens of sheep into a small arena, where they prayed en masse before slaughtering and skinning the animals. Then they threw the carcasses into several vast fire pits, their white outfits now flecked red with sheep’s blood.

The Samaritans still living in Al Tor chattered to each other in Arabic, but their younger Israel-based cousins spoke mainly in Hebrew. And their guests were mainly Israelis: several senior army and police officers, two cabinet ministers and the leader of the local settler council.

The Palestinian governor of Nablus, Ibrahim Ramadan, called the high priest to offer his greetings, but opted against attending in person. The governor was wary of the coronavirus — most Palestinians had not yet been vaccinated — but he was also leery of being seen as normalizing relations with representatives of the Israeli government and the settler establishment.

“This has obviously created an uncomfortable environment for us,” Mr. Ramadan said.

Besides navigating these tensions, the Samaritans have an even more pressing challenge: staving off extinction.

Some Samaritans leave the small community, while generations of marriages within it have led to a number of genetic defects. To rejuvenate the population, the Samaritan leadership wanted to bring in new members, without further complicating their relationships with Israelis and Palestinians.

So two decades ago, they turned to an international matchmaking service — which connected them to women in an impoverished village in Ukraine. Since then, the community has arranged 17 marriages between Samaritan men and Eastern European women.

Shura Cohen was the first bride to arrive, marrying into the community in 2003, at 19.

Born to a secular Christian family, Ms. Cohen arrived at the height of the second intifada, speaking no Arabic or Hebrew, and knowing nothing of the Israeli-Palestinian conflict. It was an unlikely arrangement, Ms. Cohen acknowledged. But it was also perfectly consensual, she said, rejecting suggestions that she and other newcomers were not there by choice.

Ms. Cohen changed her name from Aleksandra Krasuk and quickly became trilingual, adding another layer to the palimpsest of Samaritan identity. She speaks Russian with her fellow immigrants, Arabic with her in-laws, and Hebrew with Israelis. She takes her children to Palestinian elementary school every day, and visits her parents in Ukraine each year.

But, she added, with a clarity that most others in the community lack: “I’m Israeli, not Palestinian.”