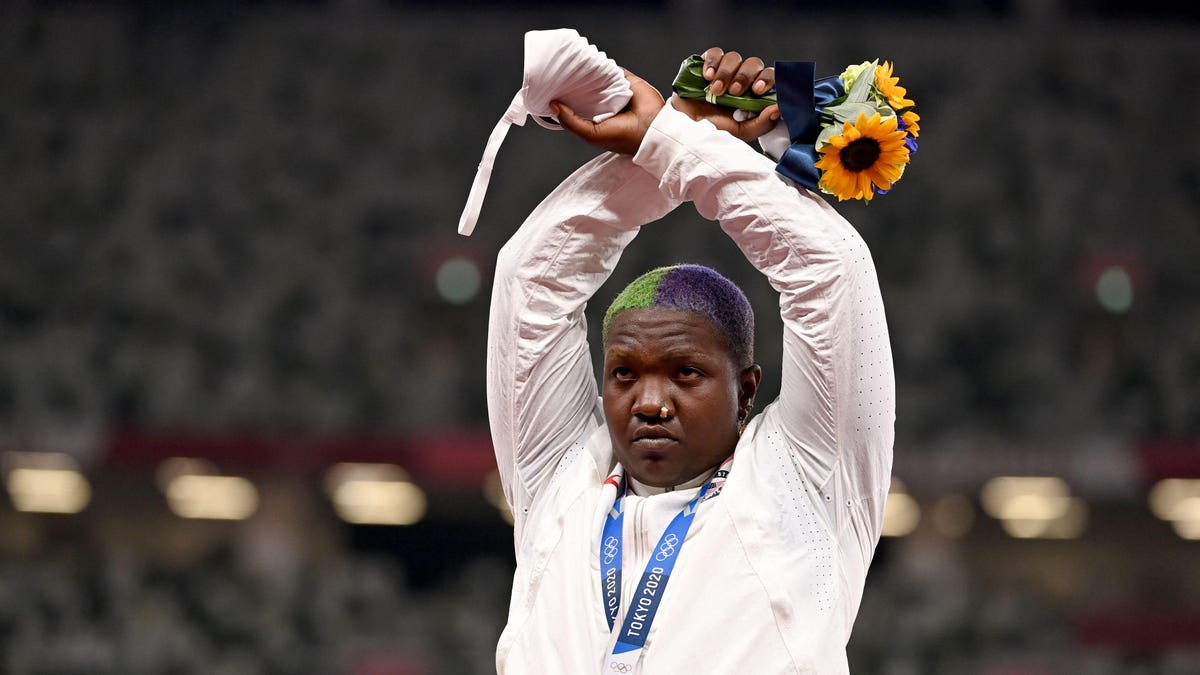 Tokyo 2020 has the highest number of openly LGBTQ+ competitors ever, counting more out athletes than all previous Summer and Winter Olympic Games combined and featuring the first openly transgender and nonbinary athletes to participate.

British diver Tom Daley won gold in the men’s synchronized 10 meter platform and said he felt “incredibly proud to say that I am a gay man and also an Olympic champion” after not believing he could “achieve anything because of who” he was as a child.

Skateboarder Alana Smith said they were “proud” of achieving their goal of being “a visual representation for humans like me” after being the first openly nonbinary person to represent Team USA.

The International Olympic Committee said it was investigating gay Team USA shot put silver medallist Raven Saunders after she raised her hands in a cross on the podium, a gesture she said was a “shout out” to Black people, the LGBTQ+ community and all people dealing with mental health.

Engaged soccer and basketball stars Megan Rapinoe and Sue Bird, respectively, competed for Team USA in the Tokyo Games after they met during the Rio Olympics in 2016, a less complicated arrangement than American softball players Amanda Chidester and Anissa Urtez, who are one of the only engaged or married couples to compete against one another at the Games.

New Zealand weightlifter Laurel Hubbard also made Olympic history as the first openly transgender women to compete in the Games, thanking the International Weightlifting Federation for showing “that weightlifting is an activity that’s open to all of the people in the world.”

182. That’s at least how many openly LGBTQ+ athletes there are competing at the Tokyo 2020 Games, according to Outsports. In Rio, there were 56. In London, 23.

The vast majority of openly LGBTQ+ athletes are women, in line with broader trends among elite athletes. Openly LGBTQ+ women outnumber out men at the Games by about nine to one and represent a far greater diversity of sports. There are more than 40 openly LGBTQ+ competitors in women’s soccer alone, a sport with no out men. The international nature of the Games shines a light on the barriers LGBTQ+ people around the world face. Many countries participating criminalize homosexuality and being transgender—some with the death penalty or corporal punishment—and few permit same-sex marriage or allow people to legally change their gender. Beyond the law, many face discrimination, violence and prejudice for being who they are and for some athletes attending the Games can be a risk in itself. Tongan swimmer Amini Fonua, for example, is openly gay and represents a country where homosexuality can be punishable by a 10 year prison sentence. Other athletes—including Hubbard, Quinn, Smith and Daley—have been the subject of offensive and abusive slurs by pundits commenting on the Games around the world, as well as being misgendered on TV broadcasts and on official Olympic biographics.

In 2016, The Daily Beast published an article that was accused of outing a number of gay athletes at the Rio Games. TikTok and Twitter users have reportedly done the same in Tokyo. The 2022 soccer World Cup is set to be held in Qatar, a nation that punishes homosexuality by up to three years in prison. While Qatari officials have insisted everyone is welcome, the decision for Qatar to host was criticized by rights groups and there were calls in 2010 for then-FIFA boss Sepp Blatter to resign after he joked that gay fans and players should just “refrain” from sex during the tournament.

After winning his third Olympic medal in as many Games—and his first gold—27-year old Briton Tom Daley recalled coming out in 2013. “I always felt like the one that was alone and different and didn’t fit,” he said. “There are more openly out athletes at these Olympic Games than any Olympic Games previously… I hope that any young LGBT person out there can see that no matter how alone you feel right now, you are not alone. You can achieve anything.”

At least 181 out LGBTQ athletes are at the Tokyo Summer Olympics, more than triple the number in Rio (Outsports)