They Wait Hours to Withdraw Cash, but Most A.T.M.s Are Empty 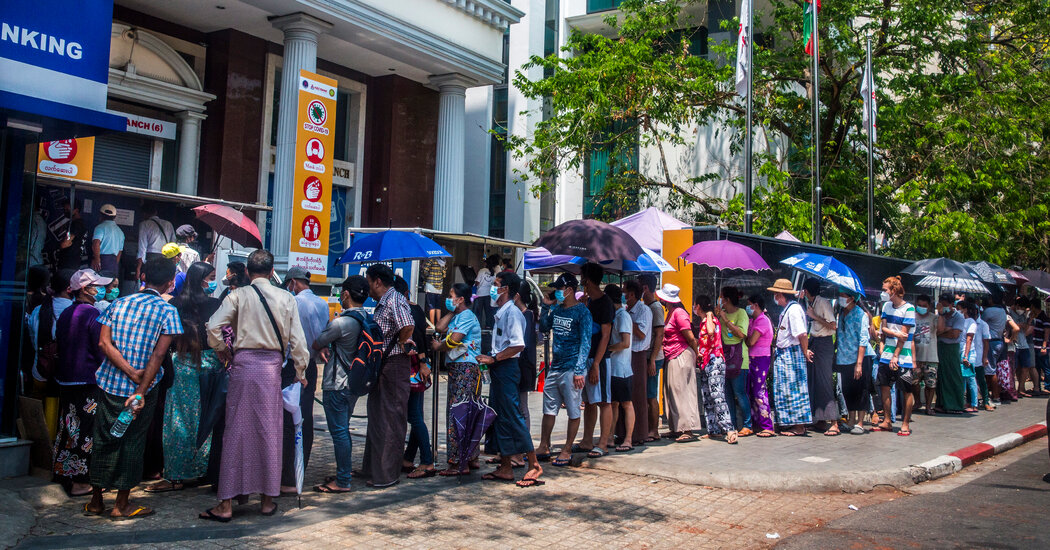 The customers, desperate for cash, began lining up at the A.T.M. at 3:30 a.m. By dawn, the queue had swelled to more than 300 people. By noon, when temperatures had reached 100 degrees, many were still waiting, hoping this would be the day they could finally withdraw money from their own bank accounts.

Since the military seized power in a coup six months ago, Myanmar has been crippled by a cash shortage. To help prevent a run on the banks, randomly selected A.T.M.s are stocked with cash daily, and withdrawals are capped at the equivalent of $120.

The economic fallout has had sweeping consequences. With cash in short supply, depositors can’t withdraw their savings, customers can’t pay businesses and businesses can’t pay their workers or creditors. Loans and debts go uncollected. The value of the kyat, Myanmar’s currency, has tumbled 20 percent against the dollar.

Fewer than 100 A.T.M.s now have cash each day across the Southeast Asian nation. Currency hoarding has become widespread and many businesses will accept only cash, not digital bank transfers.

A new breed of currency brokers has sprung up to provide cash in exchange for online transfers at a cost of seven to 15 percent. In effect, Myanmar now has two values for its money: a higher value for cash and a lower value for online funds. Experts warn that the country is plunging into a full-blown financial crisis.

“At the moment, everything is frozen,” said Richard Horsey, a senior adviser on Myanmar for the International Crisis Group. “This is a deep, deep economic crisis. It’s a confidence issue — confidence in the regime, the banks and the economy.”

Myanmar’s economy began to expand about a decade ago, when the generals relaxed their grip on the country after nearly 50 years of military rule. That progress has quickly been undone by the military’s return to power in February.

Confidence in the government and private banks has evaporated with the coup and the killing of at least 945 people, most of them shot by soldiers during demonstrations.

An anti-coup protest movement and general strike have paralyzed much of the economy, including closing nearly all of the country’s bank branches in the first months after the military takeover. Missteps by the junta, such as restricting online payments, have contributed to the crisis.

In mid-March, the regime tried to stifle the civil disobedience movement by shutting down the mobile internet. But this blocked cellphone bank transfers, a popular — and cashless — way of making payments.

“When banks were closed, there was a general fear of not being able to get cash,” said Vicky Bowman, director of the nonprofit Myanmar Centre for Responsible Business and a former ambassador to Myanmar from Britain. “Then the government made it worse by turning off the mobile internet. That further increased the desire to have cash.”

The account holders at the Kanbawza Bank branch in Mandalay made a lucky guess when they lined up before dawn. Workers arrived late that morning and loaded the machine with kyat. The first 38 people in line got money. When Ma May Thway Chel, the 39th customer, reached the A.T.M., it had run out.

“I feel like it’s a curse just being a Myanmar citizen,” she said. “Mostly, I’m wasting my time at the A.T.M., but there is no other choice.”

In rural areas, where cash is even scarcer, some farmers have turned to barter, trading food they grow for other kinds of food or for services like medical care, as the country faces a surge in coronavirus cases and the collapse of the health care system. Urban dwellers go online offering to trade items like motorbikes or cameras for oxygen.

A spokesman for the junta, Gen. Zaw Min Tun, blamed the financial crisis in part on the loss of trade because of pandemic border closings, but suggested that the cash shortages would be resolved this month.

The German company Giesecke+Devrient, which had supplied Myanmar with materials for printing money, halted all shipments in March because of the military’s violent crackdown against civilians. But crisp new bank notes printed on slightly different paper — believed to be from China — began appearing in circulation in June.

Officials in Myanmar confirmed the Central Bank has started printing new money, but said they don’t expect it to worsen the country’s financial troubles.

“It is true that the Central Bank is printing new bank notes,” said its vice president, U Win Thaw. “But it is not undisciplined. It is calculated according to monetary policy and fiscal policy to prevent inflation.”

It is unlikely that the junta can print its way out of its economic predicament, said U Hein Maung, an economist and former researcher at an economic policy think tank in Yangon. He predicted that the financial crisis will grow more severe in the coming months.

“The value of Myanmar’s currency is going down, but it hasn’t hit bottom yet,” he said. “The crisis can only be resolved with political change.”

One goal of the withdrawal restrictions is to reduce the amount of cash reaching the pro-democracy protest movement. Banks, like the A.T.M.s, sharply limit the number of teller withdrawals and cap the amount at the equivalent of about $300. People who are sent money by the American company Western Union also have trouble collecting that money.

Western Union relies on Myanmar banks to handle its transactions, but the banks have held on to much of the money transferred since the coup. Only a few dozen people can collect their money each day, and only for transfers of less than $425. If a transfer is larger, the entire amount is frozen.

Well-connected brokers have had an easier time adjusting to the new way of doing business in Myanmar. Some brokers say privately that they get cash by paying a bank manager a 3 percent kickback. High-ranking military officers also have ready access to cash and are believed to be backing some currency brokers.

“Some bank employees are dishonest,” said Mr. Win Thaw, the Central Bank vice president. “We will take action against such bankers who take a certain percentage in exchange for cash.”

In Yangon, with a population of five million, only about two dozen A.T.M.s are stocked each day, according to the banks. In Mandalay, with about 1.5 million people, only a dozen machines are stocked. Customers don’t know in advance which ones they will be.

Despite the risks from rapidly spreading Covid-19, lines form early each morning at A.T.M.s. By the time the banks announce which machines have money, thousands of people have waited in line for hours, usually at the wrong A.T.M.

May Thway Chel, 28, an accountant, has gone to the same Kanbawza Bank branch to withdraw her money nearly every day for five months, but has gotten cash only four times.

Customers like her have gotten used to a routine.

At the head of the line, a currency broker acts as a self-appointed monitor and imposes order by giving everyone a number, which he writes on their arms with a blue permanent marker. Then the customers settle in for the long wait. Some sit on their sandals. Some sit on the ground. One woman in Mickey Mouse pajamas brought a blue plastic chair that she pulled along with a string when the line moved forward.

“Sometimes we don’t have money to buy rice and food,” May Thway Chel said. “Sometimes I feel very depressed and think about suicide. We lost our dream after the coup.”