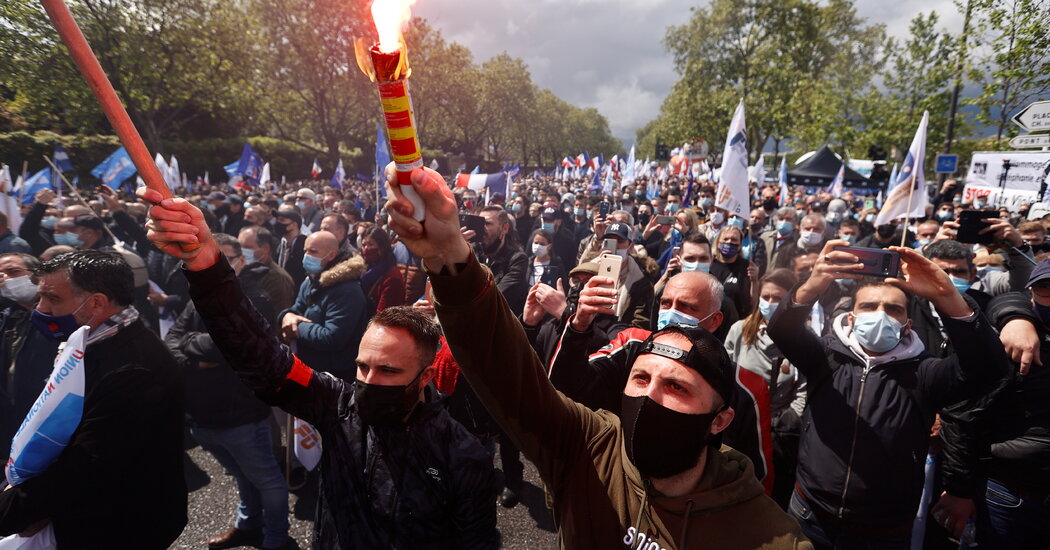 PARIS — Declaring that their work has become increasingly dangerous because of the government’s failure to address France’s underlying social problems, thousands of police officers protested in Paris on Wednesday in a show of force that left politicians scrambling.

Police union leaders demanded tougher laws for violence against officers and stiffer sentences against convicted criminals as thousands massed in the rain in front of the National Assembly, issuing warnings to political leaders who were present but were not invited to speak.

“Your presence is an important sign,’’ Fabien Vanhemelryck, the secretary general of Alliance Police, a right-leaning union whose members appeared to dominate the protest, said from a stage next to a giant screen. “It must not be a sign of future elections, but a wake-up call, a sense of responsibility, of change and a return to safety.’’

The protest, organized by 14 police unions, came after the recent killings of an officer and a police employee, even as pressure has been mounting to reform a force often criticized for its brutal tactics and racist behavior.

With the theme of crime already dominating the political debate a year before the presidential election, the protest drew leaders from nearly all of France’s political parties. The criticism of official policy put the government of President Emmanuel Macron in an awkward situation and threatened to overshadow a rare nugget of good news on Wednesday, as restaurants and cafes partially reopened nationwide after months of pandemic restrictions.

Gérald Darmanin — the powerful interior minister and head of the national police — joined the demonstration as officers called out to him, “We need your help.’’

In a rare instance of a minister joining a demonstration critical of his own government, Mr. Darmanin said he was simply expressing his solidarity while political rivals said he was effectively protesting against himself. Mr. Darmanin has spearheaded the government’s efforts to fend off a challenge from Marine Le Pen, the far-right leader and Mr. Macron’s main challenger.

The issue of crime has directly affected the fortunes of French politicians and parties in the past two decades, and is expected to do so again in the coming months, as France tries to pull itself out of the ravages caused by the pandemic. On Wednesday, some political figures on the left joined the protest and talked tough on crime, even though the government’s statistics do not show the kind of criminality conjured by politicians.

Fabien Roussel, the leader of the French Communist Party, recently launched his presidential campaign with an emphasis on crime.

In an interview, Mr. Roussel said that “there is a kind of normalization of violence today” and that he wanted “to ensure that we can deliver safety to all,” adopting words and a tone usually heard from right-wing politicians.

“It’s no longer possible to neglect this issue,” he said.

France is one of the few Western democracies with a centralized police, and its 150,000-member national force is one of the most powerful constituencies in the country. Because it falls under the direct authority of the interior ministry, the protest amounted to “a demonstration of defiance toward the government,” said Fabien Jobard, a political scientist specializing on the police.

Protesters began by paying hommage to Eric Masson, an officer killed in the southern city of Avignon during an antidrug operation, and Stéphanie Monfermé, a police employee killed in a terrorist attack at a police station in the city of Rambouillet, near Paris.

The number of police officers injured while on duty has nearly doubled in the past 15 years, jumping from 3,842 in 2004 to 6,760 in 2019, during a year marked by violent Yellow Vest protests, according to figures from the interior ministry.

Mr. Macron has recently stepped up efforts to respond to police concerns. He pledged to recruit 10,000 additional police officers by the end of his current five-year term and went on a ride-along with officers in a drug-dealing area of the city of Montpellier.

While police leaders have demanded tougher laws, they have also attributed crime to the failure of successive governments to deal with France’s social problems, from the poor integration of immigrant children to problems in the nation’s schools.

Linda Kebbab, a representative for Unity SGP Working Police Force, the biggest police union, said that the police were often confronted with “the collective failure of the state for the past 40 years” in implementing proper social and educational policies, especially in impoverished, high-crime areas. Instead, she said, officers had become the government’s last resort to ensure security in those areas, at their own risk.

“We are being sacrificed,” she said in an interview.

At the protest, which was also joined by citizens expressing support for the police, Daniel Chomette, a representative for Alliance Police and a police officer for 34 years, said that officers often had the “impression of working for nothing.’’

“The police are asked to solve all the problems of society, even as they put obstacle in front of us,’’ Mr. Chomette said, as protesters behind him held signs that read, “Paid to serve, not to die.’’

The police have been pushing back on proposals to reform their methods, such as banning chokeholds, and to open themselves up to greater scrutiny for racism. Police unions also recently broke off monthslong talks with the government on potential reforms.

Controversies over deadly and brutal police interventions sparked widespread protests against the police last year. A contentious security law empowering the police drew thousands of protesters to the street as video footage revealed the brutal beating of a Black music producer, Michel Zecler, inside his own Paris studio by officers.

While police union leaders emphasized in Wednesday’s protest that their duty was to protect French citizens, the national force is often seen as protecting the interests of the state. A recent poll showed that 27 percent of respondents said they regarded the police with “anxiety’’ or “hostility.’’

“The police play a very strong role in protecting the political regime in France,” Mr. Jobard, the police expert said, adding that they often “feel that politicians are using them as a firewall, as a shield.”

Despite the intensifying debate on insecurity, crime in France rose in the 1970s through the mid-1980s before declining and stabilizing. Government data show that nearly all major crimes are now lower than they were a decade or three years ago.