Thousands of Migrants Huddle in Squalid Conditions Under Texas Bridge 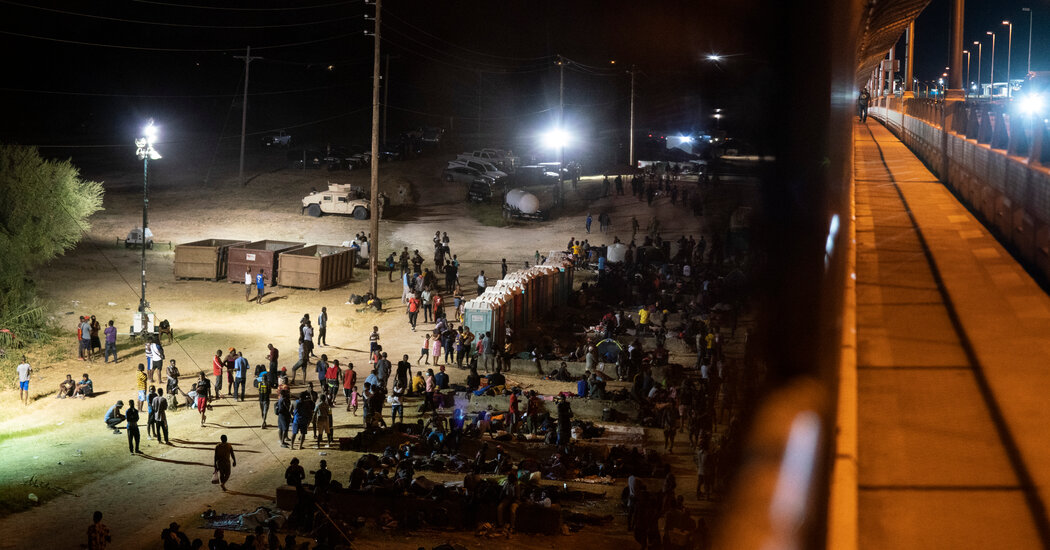 DEL RIO, Texas — Thousands of migrants were crowded under a bridge outside the border community of Del Rio on Thursday, part of a massive surge in migration across the Rio Grande this week that has overwhelmed the authorities and caused significant delays in processing the arrivals.

The U.S. Border Patrol said that more than 9,000 migrants, mostly from Haiti, were being held in a temporary staging area under the Del Rio International Bridge as agents worked as quickly as they could to process them.

The temporary camp has grown with staggering speed in recent days, from just a few hundred people earlier in the week. The authorities and city officials said they expected thousands more to cross the ankle-deep river between Mexico and Del Rio in coming days.

The Border Patrol said it would send more agents to the region, “to immediately address the current level of migrant encounters and to facilitate a safe, humane and orderly process.” The shaded area under the bridge, the Border Patrol said, was to “prevent injuries from heat-related illness” while migrants were waiting to be taken into custody.

The scene — of dense crowds sleeping on dirt or milling about in triple-digit heat amid conditions of deteriorating sanitation — drew condemnations from local officials. Gov. Greg Abbott of Texas ordered the state police and the National Guard to assist border agents in Del Rio, saying the federal response had not been enough to quell the surge in crossings.

“The Biden administration is in complete disarray and is handling the border crisis as badly as the evacuation from Afghanistan,” he said, referring to President Biden’s decision to end America’s longest war.

The Southwest border has been inundated in recent months with a surge in unauthorized crossings not seen in more than two decades. More than 200,000 people crossed last month, bringing the total this fiscal year to more than 1.5 million.

But in recent days, the swelling crowds in Del Rio, a town about 150 miles west of San Antonio that is surrounded by ranch land, acres of thorny brush and towering mesquite trees, have created a new humanitarian challenge.

Bruno Lozano, the city’s mayor, described on Thursday squalid conditions under the bridge that more so resembled a shantytown, with little access to clean water and food and just a few portable toilets. The vast majority of those who arrived appeared to be fleeing Haiti, the Caribbean country still reeling from a series of natural disasters and the assassination in July of its president, Jovenel Moïse, local officials said.

“There are 9,000 people really anxious and stressed,” said Mr. Lozano, who has asked federal officials to support his city of 35,000 residents.

The Del Rio border sector has seen high migrant traffic this year, particularly from Haitians who started arriving in much higher numbers beginning in June, when there were more than twice as many caught crossing the border illegally than in the previous month. And the numbers continued to go up in July and August, according to recent border statistics.

Earlier this week, even more Haitians were caught trying to cross through the Del Rio region, a desolate 245-mile stretch of the United States border with Mexico. By Thursday, the Department of Homeland Security sent additional officers to the region to help relieve the backup, according to an official familiar with the plans who spoke on the condition of anonymity because the person was not authorized to speak publicly about the matter.

The government also plans to fly some of the migrants to other parts of the border that are not experiencing a surge like Del Rio’s. And return flights to Haiti are set to begin on Monday, as well, which the Biden administration hopes will signal to other Haitians that they should not try to cross the southern border.

The administration has come under intense pressure from Republicans for its handling of the border. In recent months, Mr. Abbott instructed state law enforcement to arrest migrants for trespassing to deter illegal immigration, because, he said, the Biden administration was not.

While the Biden administration had discussed repealing a Trump-era public health rule put in place at the beginning of the pandemic that blocked many asylum seekers from coming into the country, the administration ultimately put off plans because of the high number of migrants crossing the southern border illegally and the resurgence of the coronavirus in recent months.

But on Thursday, a judge in Texas ordered that the administration stop turning migrant families away under the public health rule, starting in 14 days. Because of humanitarian exemptions and other reasons, the administration has only been turning away a fraction of the families who have been caught at the southern border. In August, it used the public health rule to turn away about 18 percent of the families that crossed the border without documentation, according to recent border data. But any increase in processing migrants into the country could strain the already-stretched system.

This latest surge in Del Rio comes during a small management shake-up at the Department of Homeland Security, with the secretary’s chief of staff, the assistant secretary for border and immigration policy and the top prosecutor at Immigration and Customs Enforcement recently announcing plans to leave the agency at the end of the month.

The city of Del Rio, located in a southwest patch of the state on the Edwards Plateau, just across the Rio Grande from Ciudad Acuña, Mexico, has experienced a relentless wave of migration since this spring, in part because its remoteness makes it easier to cross, officials said.

Immigration agents were releasing so many migrants into town in March that residents complained that the spike would drain the town’s limited resources. Victor Escalon, the South Texas regional director for the state’s Department of Public Safety, said dozens of arrests for criminal trespassing, of migrants crossing illegally, had overwhelmed the local jails.

“We have to put the pressure and deter the activity,” said Mr. Escalon, who is leading Operation Lone Star, a program created by Mr. Abbott this year that allows him to send resources and hundreds of state agents to border communities.

Tiffany Burrow, the operations director for the Val Verde Humanitarian Border Coalition’s migrant respite center, said she worried the group’s resources would not be enough to accommodate this week’s deluge.

“We can’t help that many people,” Ms. Burrow said. “The city is not going to sustain all these people. The city under the bridge could become bigger than Del Rio.”

In typical times, the group helps about 300 migrants a day connect with transportation to their final destination in the United States.

By late afternoon on Thursday, the immense crowds of adults and children could be seen crammed beneath the bridge in the sweltering heat. Many could expect to wait up to two weeks before being processed by border agents and then taken to a shelter, officials said.

Among those waiting were a couple from Cuba who are expecting their first child. On Thursday, they watched with growing distress as the amount of people awaiting processing grew to unimaginable numbers.

“The conditions are not good,” said Yanet, 46, who preferred not to use her last name. “I had to take a bath in the river. There was a lot of dust under the bridge.”

While waiting, the migrants have access to 22 portable toilets but no running water. They mostly feed themselves with food bought in Mexico, running back and forth across the Rio Grande. At night they sleep on packed dirt beneath the bright glare of floodlights, surveillance equipment and armed border guards.