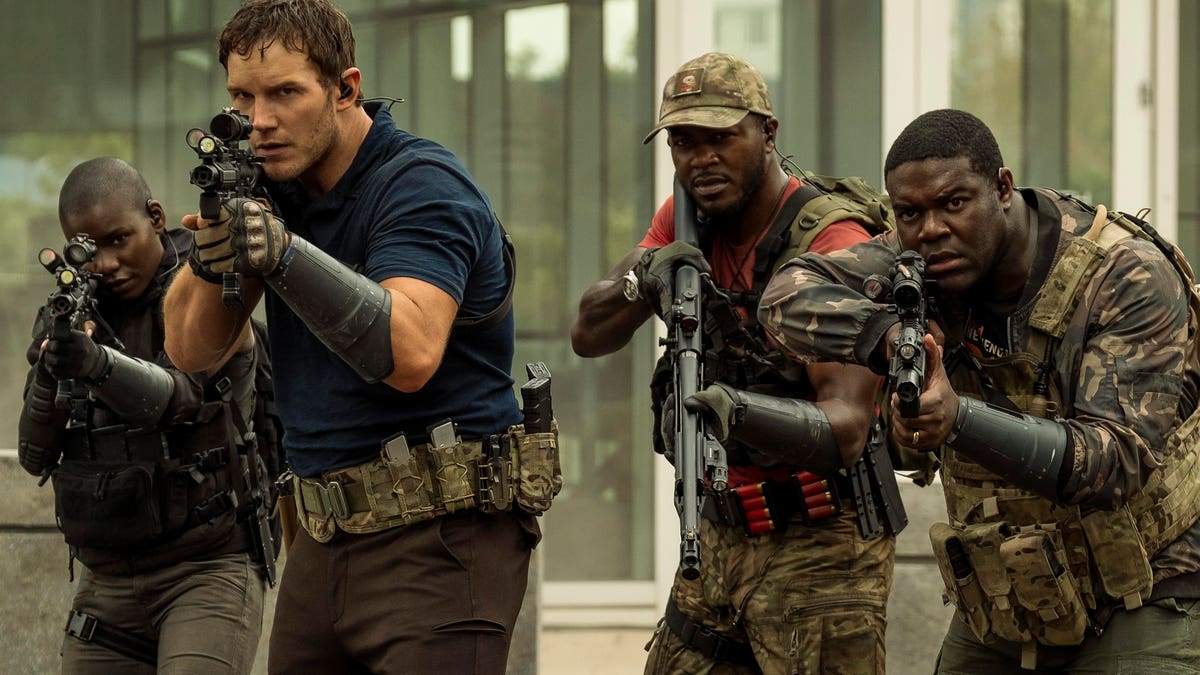 For a second week in a row, Chris McKay’s The Tomorrow War was the most-watched movie according the Nielsen ratings. The Chris Pratt-led sci-fi adventure, about folks recruited by time travelers to fight a losing war against future-tense alien invaders, logged another 1.099 billion minutes. That rounds out to around, presuming beginning-to-end viewings another eight million households watching the 138-minute flick. Originally intended as a Paramount theatrical release, the Skydance flick was sold to Amazon for $200 million as the streamer positioned it as their big summer premiere. With 1.229 billion minutes over its “opening weekend” and a second-frame drop of just 15%, mission: accomplished.

I’d love to say that the film, which is arguably the best blockbuster-y movie of the summer by default, would have earned halfway decent global box office had it opened as intended in non-Covid times. But The Tomorrow War is an original, star+concept big-budget Hollywood fantasy, exactly the kind of thing we all claim we want but tend to ignore when it pops up in theaters. Plenty of folks will consume the kind of content they claim to want only when it requires no effort and no additional charge. We saw this a few weeks ago when Disney’s Raya and the Last Dragon (offered theatrically and via Premier Access in early March) skyrocketed once the 90-day “window” passed and it became “free” to Disney+ subscribers.

Pixar’s Luca earned 809 million minutes in its fourth frame following three 1 billion-plus “minutes viewed” frames, but that’s still a remarkable hold for what surely would have been a solid theatrical hit in better times. No, the Italy-set coming-of-age comedy was never going to earn Inside Out ($854 million in 2015)-level grosses, but the film had good reviews, a primal appeal and the mere existence as a rare Pixar film that didn’t rip your heart out and piss on it while deconstructing the biggest questions in all existence. Soul, on the other hand, might have earned Inside Out or Coco-level earnings ($805 million in 2017) had things gone differently.

It’s no secret that Pixar employees are not happy that their animated films are not just going straight to Disney+ but aren’t even getting the “Premier Access” treatment. On one hand, Pixar is clearly being used as the A+ brand to lure folks to Disney+. On the other hand, it’s still disheartening and threatens to weaken Pixar’s previously uncontested value as a theatrical brand. Seeing Red is allegedly opening theatrically in March of next year, as will the Chris Evans-voiced Lightyear action toon next June. But for now, Disney sending Luca to Disney+ turned out to be a huge win for Disney+ (and arguably Luca, which doesn’t have to worry about commercial results denting and otherwise positive artistic reception).

Meanwhile, Black Widow passed F9 on Wednesday to become the year’s biggest domestic grosser. Scarlett Johansson’s MCU prequel has earned $169 million, low by post-Avengers Marvel standards but halfway decent in terms of the circumstances. No, I don’t think it would have been a $225 million grosser without the Disney+ “Premier Access” option. Come what may, Black Widow debuted on Disney+ with 541 million minutes. That translates into around four million viewings of the 134-minute feature. Considering it logged around $33 million, or 1.1 million purchases on opening weekend (as it was opening with $80 million in domestic theaters), that means that the folks who bought the film may have watched it multiple times.

That argues toward the notion that “Premier Access” isn’t just biting into first-time theatrical viewership but into repeat viewings as well. A family of five spending $30 once (instead of $50-$100 in tickets and concessions for each viewing plus post-theatrical spending) is great for that family of five, but it’s clearly not enough to justify big-budget tentpole flicks. The $60 million Disney+ debut only “works” because it’s backed by $346 million-and-counting in theatrical grosses. Yes, streaming and theatrical can coexist, but not if the end game of streaming is to cancel out the theatrical revenues. And yeah, I imagine Black Widow’s “minutes viewed” figures will skyrocket when it becomes “free” to Disney+ in early October.

The feature film trilogy was produced by Chermin with the intent of being distributed theatrically by Fox over three months. But Disney’s purchase of Fox, and the ending of Chermin’s pact with Fox in January of 2020 just before the pandemic made a conventional theatrical release impossible, meant that what was supposed to be an ambitious theatrical gambit is now another innovative streaming debut. And, like Sony’s The Mitchells Vs. the Machines which was sold to Netflix and debuted to rave reviews and sky-high viewership on April 30, this should have been a major theatrical studio offering up a mainstream film with a lesbian protagonist which instead becomes another “streaming is more inclusive” feather in Netflix’s cap.