Traveling to Hong Kong in the pandemic is hard. The government just made it harder. 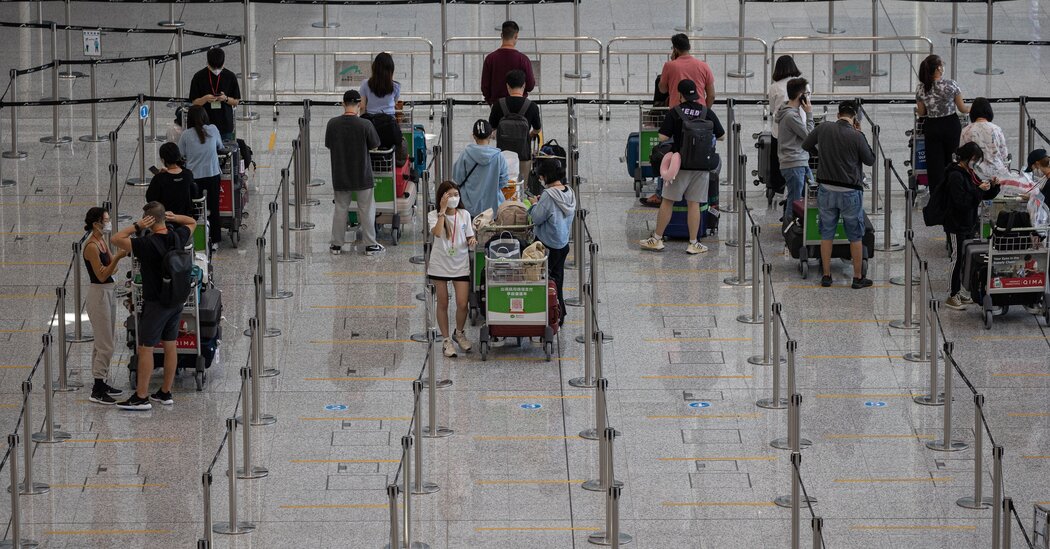 The members of the Bordia family thought they were finally going home.

Priyanka and Ankur Bordia had been trying for almost a year to return to Hong Kong from India, where they traveled in February 2020 as coronavirus cases began to increase in the Chinese territory.

In accordance with Hong Kong’s pandemic border policies, which vary by country, they had to be outside India for at least 21 days before they could return. So they went to the Maldives and then Dubai. From there, they planned to fly to Hong Kong and complete another 21 days of mandatory hotel quarantine, all at their own expense.

But their plans were upended this week when the Hong Kong government, citing concerns about the more contagious Delta variant, abruptly moved 15 additional countries to its “high risk” category, including the United States, France and the United Arab Emirates. The changes extended the quarantine period from 14 to 21 days for vaccinated travelers arriving from those countries, and barred unvaccinated travelers who had been in any of those countries in the previous 21 days.

The changes went into effect on Friday, the day the Bordias were supposed to arrive in Hong Kong. And even though the Bordias were vaccinated in India, Hong Kong does not recognize Indian vaccine certificates, which meant they would be barred from entering. Now stranded in Dubai with their two daughters, ages 1 and 3, they are contemplating starting their 21-day “washout” all over again in a lower-risk country.

“We are drained financially, emotionally, mentally, physically,” said Mrs. Bordia, 37, who has lived in Hong Kong for many years, along with her husband, Ankur, 38, who owns a jewelry business there.

Since the government’s announcement, untold numbers of travelers have canceled trips to and from Hong Kong, while others have found themselves stranded or rushed to get back before the new rules went into effect.

The abrupt rule changes have drawn criticism from businesses and Hong Kong residents. Public ire has been raised further by reports that the actress Nicole Kidman was allowed to skip quarantine altogether when she arrived in Hong Kong last week to film “Expats,” a new Amazon Prime Video series about privileged foreigners living in the global financial hub.

Ms. Kidman was seen boarding a private jet in Sydney, Australia, the center of a Delta-driven outbreak that has sent much of Australia into lockdown. As of Friday, Hong Kong is requiring vaccinated travelers from Australia to quarantine in a hotel for 14 days, up from the previous seven.

Amid the growing anger, Carrie Lam, Hong Kong’s chief executive, apologized to travelers on Tuesday for the disruptions.

“I hope they will understand that everything we are doing is to protect Hong Kong from another major outbreak,” she said.

And without naming any celebrities, the Hong Kong government said in a statement that an unnamed person filming in Hong Kong had been granted a quarantine exemption “for the purpose of performing designated professional work, taking into account that it is conducive to maintaining the necessary operation and development of Hong Kong’s economy.”

Hong Kong’s Covid-zero strategy has been successful in keeping virus cases to a minimum: about 12,000 in a population of seven million. The government says strict quarantines are necessary to protect the local population, with vaccination uptake especially low among older residents.

But the frequent rule changes have made travel risky. The government also said this week that it was suspending an antibody testing program that would have allowed some travelers to reduce their quarantine to seven days, which again sent people scrambling to extend their stays at quarantine hotels that are often booked solid.