Tunisia’s President Holds Forth on Freedoms After Seizing Power 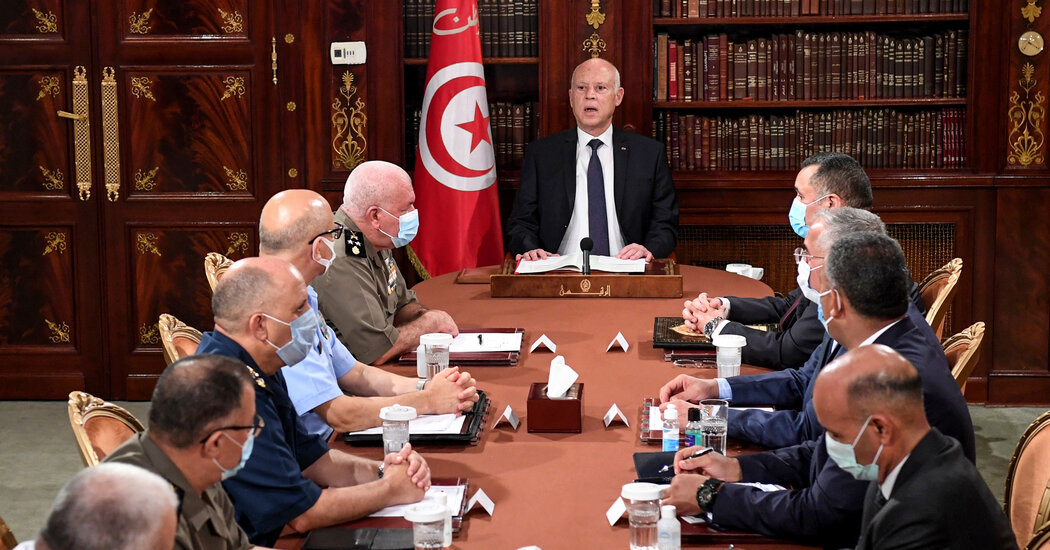 TUNIS — The man who critics were warning could become Tunisia’s next dictator locked eyes with me and intoned, “Welcome to Tunisia, where freedom of speech is protected with no interference in personal freedoms at all.”

We were in a formal audience room in the presidential palace in Tunis around midday on Friday, all crystal sconces and gilt-edged chairs. I had been summoned there by President Kais Saied, who five days before had fired the prime minister, suspended Parliament and taken control of the country where, 10 years ago, the revolts against authoritarian rule that came to be called the Arab Spring first erupted.

“‘Why do you think that, at 67, I would start a career as a dictator?’” the president said, quoting Charles de Gaulle, the French leader who re-established democracy after the Nazi occupation of France. He pledged that he would not strip away the hard-won freedoms in Tunisia, the lone democracy to emerge from the Arab uprisings.

“So there is no fear of losing the freedom of speech,” the president, who is 63, promised, “and no fear as to the right of people to protest.”

Except that he had banned public gatherings of more than three people, and security forces had closed the local office of the pan-Arabic news channel Al Jazeera.

On the streets of Tunis, though, I found little appetite to protest. There was almost no sense of dread about the fate of Tunisian democracy; I went around feeling its lack like a phantom limb.

Tunis placidly went on: shoppers in the streets, sweat-glazed sunbathers on the beaches — only some taxi radios were tuned to the news. People seemed content to wait and see what the man they had entrusted with their country would do to fix it. You had to wonder whether democracy the way the West sees it was what many of them had wanted in the first place, or just to live better, with dignity and more freedoms.

Tunisia was supposed to be the last great hope for the Arab Spring. The fact that its democracy survived even as the rest fell to civil war or counterrevolution gave inspiration to people across the region and many in the West.

But a decade of stubborn unemployment, rising poverty, metastasizing corruption and political deadlock — and now the pandemic — have wiped out faith in the government. This month, Tunisians again flooded into the streets to demand change, giving Mr. Saied his opening to seize power.

I’d spent several days in the capital when, suddenly, I got the call to go with two other journalists working for The New York Times to see the president. I thought it might be my chance at an interview. As it turned out, we had been invited for a lecture.

The president is a former law professor, and his voice was so resounding and his elocution so impeccable that I could immediately imagine him in his old lecture hall. His formal Arabic boomed off the marble floors as though the room had been built to his acoustic specifications.

At one point, he picked up a sheaf of papers from a small marble-and-gold table to his right. It was a printout of the U.S. Constitution, the dignity of which was somewhat diminished by the fact that it was held together by a paper clip.

He had highlighted part of it in yellow, which he now read out in French: “We the people of the United States, in order to form a more perfect union …. ” He had studied and taught the document for more than three decades, he said. He respected it. It was a “great” constitution. Just as American leaders like Abraham Lincoln had had to take extreme measures to preserve the system, he said, so must he.

When one of my colleagues started to translate for me, he was ordered to stop. Everything was being filmed by a government camera crew, and we came to realize that a video of the whole episode would be posted to the president’s official Facebook page, which was perhaps why it was important that we, the audience, be silent.

“This is not a press interview,” he said when we began to ask questions, though he promised to arrange a follow-up.

I had taken the earliest possible flight to Tunis from Cairo, where I am based, after the president announced his power grab on television on Sunday night. I expected to land amid mass unrest.

By then, demonstrations would have been hard to organize: Soldiers had blockaded Parliament, and a presidential decree had banned gatherings of more than three people. Yet few seemed inclined to protest.

Nearly every Tunisian I spoke with seemed pleased, if not outright thrilled, with what Mr. Saied had done, a testament to just how fed up they were.

“What,” one young Tunisian asked me, “has democracy done for us?”

It was the ballot box that originally brought Mr. Saied to power in 2019. He seemed an unlikely populist, especially among the young voters who boosted his campaign on Facebook. Nicknamed “Robocop” for his habit of declaiming in rigidly formal Arabic, usually about constitutional issues, he looked even older than he was.

But he was an outsider to the despised political elite. He had lived in the same not-very-well-off neighborhood for years. He took his coffee at the same shabbyish cafes as his neighbors.

He was elected in a landslide.

All week, we tried to parse Mr. Saied’s moves for omens of Tunisia’s future.

On Friday, an outspoken pro-revolution member of Parliament and frequent critic of the military was arrested. Then came a presidential decree saying that the emergency measures could be extended past the 30 days that Mr. Saied had originally announced.

On the other hand, he was still involved in civil-sounding talks with labor unions and other major political players.

On Wednesday, my two colleagues and I accidentally became part of the story when the police picked us up while we were reporting in Tunis. They held us at the local station while they checked our passports and questioned one of my colleagues. After two hours, they let us go with a warning to stop reporting in the neighborhood.

We had no official accreditation, with there no longer being any prime minister’s office to issue papers. Still, local journalists were shocked at our experiences. Across the region, journalists are tightly monitored, blocked from basic reporting and sometimes arrested. But not in Tunisia after the Arab Spring, these journalists said. Tunisia was supposed to be different.

Though we had requested an interview with the president earlier in the week, it was only after Twitter and local political circles lit up with news of what was being called our “arrest” that Mr. Saied’s chief of protocol called me on Friday morning. Could we be at the palace in exactly one hour, dressed appropriately?

So it was that we found ourselves in an ornate antechamber on Friday afternoon, being instructed on where to stand, where to sit and when to sit once in the presence of the president. Before we went in, I caught the chief of protocol glancing down at my sandals. He sent for a pair of borrowed, too-big, closed-toe heels for me to put on.

Once we were seated, I crossed my legs in the gilded chair, on which I dared not sit with less than perfect posture. The chief of protocol sprang up and waved his arms at me from the corner behind the president. Uncross your legs, I realized he was telling me.

Mr. Saied, oblivious to the leg drama, was saying the “difficulties” that we, the news media, had faced were unintentional. They had occurred, he said, because “some intend on making the presidency look bad.”

But he was more intent on arguing that his actions last Sunday night were constitutional. He said that it had all been done according to Article 80 of Tunisia’s 2014 Constitution, which confers exceptional powers on the president in cases of “imminent danger” to the country.

Critics, constitutional experts and political opponents have questioned whether Mr. Saied overstepped Article 80, but without the constitutional court that Tunisia is supposed to establish but never has, there is no one to adjudicate the dispute.

Mr. Saied, who has declared himself attorney general, would “respect all the judicial processes,” he said, but he warned that he would not leave anyone “to loot from the Tunisian people” — a declaration that he intended to bring corrupt politicians to account. Official corruption was one reason he had cited for seizing power.

And he made a glancing reference to the United States’ in-house troubles.

“Maybe you saw from Washington,” he said, “how the blood was spilled,” obliquely comparing the Jan. 6 Capitol riot with “thieves” in Tunisia’s Parliament who had “tampered” with Tunisian institutions and rights.

The ironies were more than obvious: A journalist from a country where democracy is under strain flying in to report on a threat to another country’s democracy, only to be reminded by the very man who might be threatening it of the gap between American ideals and American reality.

On Friday night, the meeting video went up on Mr. Saied’s Facebook page. It did not mention our detention or show us trying to ask questions; we were only props.

A colleague translated a few of the comments for me. They were virtually all approving.

“Teach them,” one said, “what freedom means.”