Turkey Is Next as Wildfires Afflict Mediterranean Countries 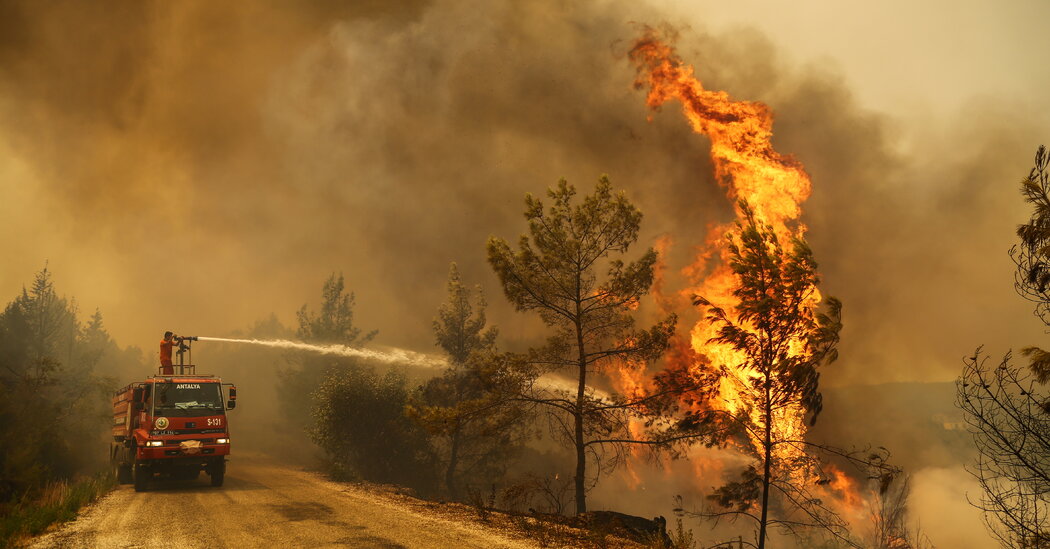 Firefighters in Turkey struggled to contain dozens of wildfires raging for a third day on Friday, as fast-spreading blazes forced popular holiday resorts and dozens of rural areas along the Mediterranean coast to be evacuated.

The fires, which authorities say may have been sparked by arson or human negligence, have killed at least four people and injured roughly 200 others.

As tourists were forced to flee hotels, some on boats as flames licked closer, local residents in rural areas watched the fires burn their homes, kill their livestock and destroy their businesses.

“Our lungs are burning, our future is burning,” Muhittin Bocek, the mayor of Antalya, a resort city, said in a telephone interview from the ravaged town of Manavgat, about 50 miles east along the coast.

The blazes are part of a broader pattern of wildfires afflicting the Mediterranean this summer, with areas in Lebanon, Syria, Greece, Italy and Cyprus also battling fast-moving fires.

They are also the latest in a series of extreme weather events around the planet — from deadly floods in Europe and China to raging fires in the United States, Canada, and Siberia — that scientists believe are linked to changes in the climate resulting from global warming.

Cagatay Tavsanoglu, a biology professor specializing in fire ecology at Hacettepe University in Ankara, Turkey, said fires in the Mediterranean basin are an annual occurrence, but the extent of the blazes this year should serve as an warning.

“Many fires could not be put out, and with the influence of dry winds, burning happened too fast,” Mr. Tavsanoglu said. “It is just the first indications of what climate change would do to the Mediterranean region in the future.”

Under models that show a global temperature increase of three degrees Celsius (or an extra 5.4 degrees Fahrenheit), the high end of predictions, the average area that burns every year in southern Europe would double, according to a research paper published in Nature in 2018.

And even if warming stays below 1.5 degrees Celsius, the goal of the Paris Climate Accords, 40 percent more land could burn, the researchers warned.

Cyprus suffered some of its worst fires in decades this summer, killing at least four. The authorities in Greece have evacuated areas north of Athens this week as forest fires have threatened homes near the capital. And in Italy, the island of Sardinia has faced “a disaster without precedent” this month, the region’s authorities have said.

In Lebanon, where the state has basically stopped functioning and authorities have barely taken any measures to help avoid the fires this summer, a teenager died this week as blazes spread across the northern part of the country and into Syria.

In the town of Akkar, videos shared online showed dystopian scenes of the fires spreading through the forests on Wednesday. Firefighters, the Lebanese military, civil defense officers and volunteers have struggled to contain them.

The fires compounded the suffering for many in Lebanon living with daily shortages of fuel and medicine, countless power cuts and the consequences of an unprecedented financial crisis.

In Turkey, the fires started on Wednesday in Manavgat, a town in the southern province of Antalya. By Friday there were fires in more than 70 other spots across the country, the Turkish forestry directorate said.

Some of the fires have been brought under control, but three people died in Manavgat and a fourth one in Marmaris, another popular holiday resort.

The fires also spread to the holiday destination of Bodrum, where at least two hotels were evacuated.

The Turkish authorities are still investigating the cause of the fires, but on Thursday the government’s communications director, Fahrettin Altun, called them an “attack.”

President Recep Tayyip Erdogan said law enforcement and intelligence officers were looking into claims of arson. “This is not something you can shrug off,” Mr. Erdogan told reporters in Istanbul on Friday. “Because it is almost at the same time, in different locations.”

Turkey has deployed some 4,000 firefighters, hundreds of vehicles and three planes to fight the fires, according to the agriculture minister, Bekir Pakdemirli.

But to some residents, the response was slow and inadequate.

“Does the Turkish Republic only have three planes?” one resident of Manavgat yelled at the foreign minister, Mevlut Cavusoglu, as he visited the town on Thursday night.

Mr. Cavusoglu spoke against the backdrop of a ravished landscape, and television footage from earlier in the day showed entire districts left empty and smoking, full of charred houses under orange skies.

Mr. Bocek, the mayor of Antalya, said one in four neighborhoods in Manavgat had to be evacuated.

In a community heavily dependent on farming and raising livestock, Mr. Bocek said most residents were still not allowed to return home as the fires were not under control.

With tensions high, a crowd attacked two people on Thursday, blaming them for starting the fires, according to Turkish media reports. When the military police intervened to protect the pair, a mob tried to wrest them back, without success.

While anger boiled in some places, in others there had not been time to think about who to blame.

“When the flames came on us, we couldn’t save anything but the cow,” Nuray Canbolat, a resident in the Kozan district in the southern province of Adana, said in a televised interview with the state-run Anadolu news agency. “We just saved our lives.”