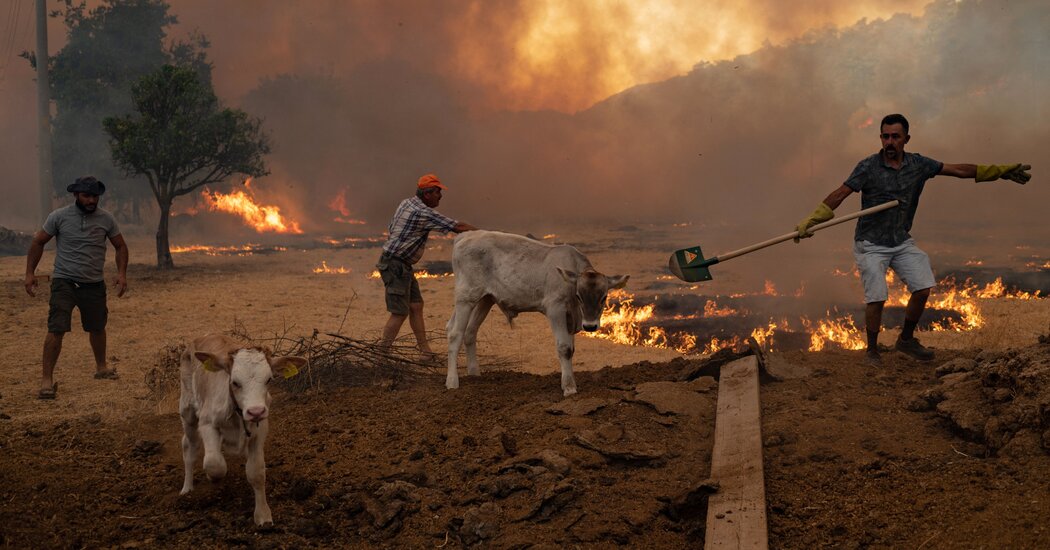 ISTANBUL — As Turkey battles its worst forest fires in decades, President Recep Tayyip Erdogan is under ferocious attack for his handling of the disaster, as well as his broader management of a country that was already battered by an economic crisis and the pandemic.

Fires blazed uncontrollably for the eighth day on Wednesday, aggravated by a record-breaking heat wave that follows a prolonged drought. The nation has watched in horror images on television and social media, as thousands of people have been forced to evacuate homes, coastal resorts and whole villages, primarily in the south, and herds of livestock have perished in fast-moving blazes.

In a summer of widespread extreme weather — from floods in Germany and Belgium to record-breaking heat waves and wildfires in Russia, Italy, Greece, Canada and the United States — the emergency in Turkey has given fodder to an increasingly vocal and united opposition to Mr. Erdogan. Tensions are running high across Turkey, where the government has long been accused of corruption and mismanagement, worsening the country’s economic troubles and the crippling effects of the coronavirus.

At least eight people have died in the fires and dozens have been hospitalized, suffering from burns and smoke inhalation. More than 170 wildfires have broken out in the past week in 39 of Turkey’s 81 provinces, burning hundreds of square miles of forest, and destroying farmland and dozens of homes.

Among the dead were a couple waiting for their son to arrive and help them evacuate, two firefighters whose truck overturned into a fire and a young volunteer ferrying water to firefighters by motorbike.

A farming couple reached by telephone Wednesday sobbed as they described how they had been left to beat back the flames themselves, without help from firefighters, when the inferno reached their village, Cokertme, on the Aegean coast in southwestern Turkey.

The couple, Nurten Bozkurt, 59 and her husband Cengiz, 55, took their livestock down to the sea when military police ordered them to evacuate, but slipped back the next morning to try to save their home and barn and surrounding houses from the encroaching fire.

“My eyes, my hands are still burning,” Mr. Bozkurt said. “I went to the barn, my wife stayed at the house. Every three to five minutes fire was falling on the straw and the manure heap.”

At the house, Mrs. Bozkurt doused the roof and balcony whenever coils of smoke appeared.

But the forest around them was decimated and their livelihoods with it, they said.

“Around our village there isn’t a place left unburned,” Mr. Bozkurt said, breaking into tears. “Our biggest loss is the olive trees and pines. Most of all, they are gone.”

The disaster has affected mostly southern coastal districts that are held by the largest opposition party, the Republican People’s Party, or C.H.P., and local mayors and party officials were quick to raise the alarm. But they soon complained in interviews and video appeals that they were not receiving the help needed from the central government — planes and helicopters to douse the blazes.

Among the criticisms of Mr. Erdogan’s government have been its mothballing of planes to combat forest fires and its decision to contract for only three Russian planes in their place.

Mr. Erdogan faces re-election in two years and though he is still the most popular politician in Turkey, he has been sliding in the polls. In a sign of the looming political battle, government opponents and supporters have waged concerted social media campaigns; critics attacked the government for failure to fight the wildfires, and the government responded with accusations that they were trying to undermine the state.

A social media campaign, #HelpTurkey, took off early Monday morning, and in a matter of hours reached 2.5 million tweets. Well-known celebrities joined the appeal, calling for international assistance in combating the fires.

But there were signs of a possible coordinated influence campaign behind it, Marc Owen Jones, an associate professor at the Hamad Bin Khalifa University in Qatar, said in an analysis posted on Twitter. He found that the accounts that drove the most traffic with the hashtag had changed their names and deleted their tweets afterward, and many of them appeared to be phony identities or “sock puppets,” tactics used in previous cases of political manipulation of social media traffic.

Mr. Erdogan’s director of communications, Fahrettin Altun, accused the opposition of using a social media campaign orchestrated from abroad to undermine the state. The government — which has been accused of running its own influence campaigns in the past — and its supporters responded with hashtags like #StrongTurkey and #WeDon’tNeedHelp.

“The so-called aid campaign, organized abroad and from a single center, was initiated with ideological motivations, with the aim of portraying our state as helpless and weakening our state-nation unity,” Mr. Altun said in a statement. “Our country, Turkey, is strong.”

The C.H.P. leader, Kemal Kilicdaroglu, joined in the criticism in a speech Tuesday, accusing Mr. Erdogan of failing to have a master plan in place for fighting forest fires and warning that Turkey needed to prepare immediately for future climate-related crises.

He also criticized the government for turning on its critics with language that suggested they were anti-state.

“When people whose souls are so hurt call for help,” he said, “instead of understanding them, labeling the people as terrorists and collaborators is a tactic that only incompetent governments will resort to.”

Mr. Erdogan has largely remained above the fray, promising aid for fire victims and thanking foreign countries for their assistance with firefighting equipment and planes. He traveled to one of the worst-hit regions over the weekend and pledged to start rebuilding homes and barns within a month.

But government officials and allies have sought to deflect blame for the disaster back onto their opponents, suggesting that the fires were set by saboteurs, and describing the appeal for help from abroad as an insidious plot against the government.

Devlet Bahceli, leader of the right-wing Nationalist Movement Party and a political ally of Mr. Erdogan, called the opposition “opportunists using the forest fires for political profit” and looking “for an environment to exploit our country’s fragile and delicate environment.”

The columnist Hilal Kaplan, known for her strong pro-government stance, wrote in the daily Sabah that the social media campaign against the government reminded her of the period in 2013 when popular protests took over the central Taksim Square in Istanbul, and the attempted coup on July 15, 2016. She warned of another coup against Mr. Erdogan’s government.

“There is a strange activity,” she wrote. “As I was accused of being paranoid when I wrote about the possibility of a coup four months before July 15, they will try the same trick again.”