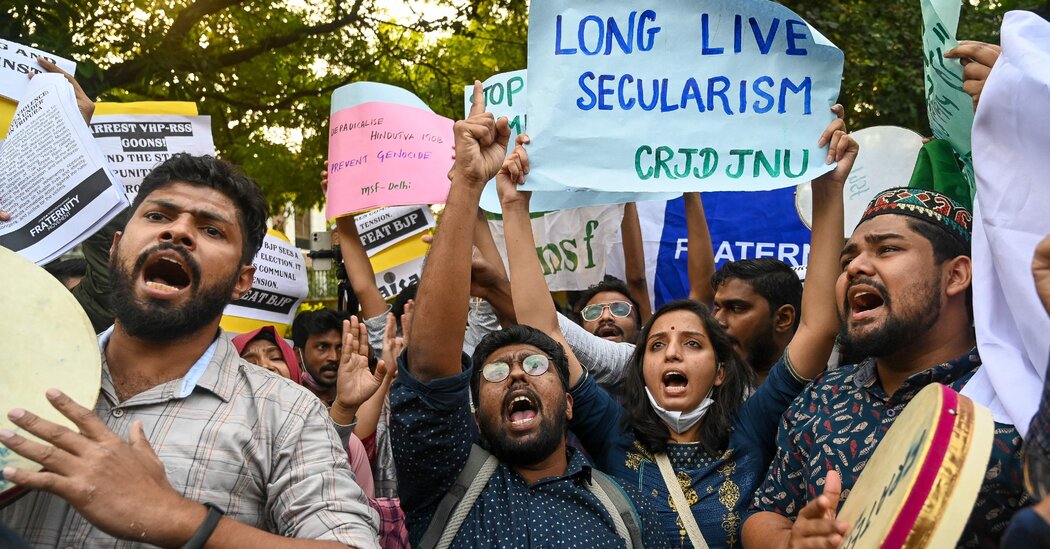 NEW DELHI — Two journalists in India were arrested after they went to cover religiously motivated violence in a northeastern state, the latest in a series of efforts to punish the media for news that casts the ruling Hindu nationalist party in a critical light.

The journalists, colleagues at a digital news network, were on assignment in the state of Tripura to report on right-wing protests and mosque vandalism that took place there this month in reaction to a deadly, days-long attack on Hindu gatherings and temples in neighboring Bangladesh.

The government has disputed news media accounts of the violence. On Saturday, India’s home ministry said reports that mosques had been vandalized in Tripura were “fake” and a “complete misrepresentation of facts.” The Tripura police described video posted by one of the journalists on social media as “contrary to the findings so far revealed” by the police investigation.

The two journalists, Samriddhi K. Sakunia and Swarna Jha, visited some of the mosques in Tripura that had been attacked, posting footage on social media of a fire-damaged mosque and a man’s account of a copy of the Quran, Islam’s holy book, being burned.

During their three days in Tripura, Ms. Sakunia posted videos and Twitter threads documenting their reporting.

In one thread, Ms. Sakunia posted a photo of herself speaking to a group of Muslim men. She included footage and photos that she said showed a mosque that had been vandalized.

“Initially when I tweeted about the vandalization of mosque, Tripura police denied the claim saying nothing has happened of that sort,” she wrote. “My report from the ground says otherwise.”

She wrote on Twitter that members of the mosque had accused the Vishwa Hindu Parishad, a right-wing Hindu nationalist group aligned with Prime Minister Narendra Modi’s Bharatiya Janata Party, of attacking the prayer spaces after their rallies. A spokesman for the group denied that its members had vandalized mosques and said that the women were masquerading as journalists in order to “defame Hindus.”

Police officers in Assam, a state that borders Tripura, stopped the women on their way back to Delhi on Sunday, detaining them at a police station overnight until Tripura police could pick them up early Monday.

The two journalists, who are in their early 20s, were charged with criminal conspiracy, spreading communal disharmony and breaching the peace. They were released on bail Monday afternoon, according to their lawyer, Pijush Biswas, who said he had asked a court to dismiss the case because it lacked “ingredients of offense.”

Ms. Sakunia wrote on Twitter on Sunday that she and Ms. Jha had been detained, posting a statement from their employer, HW News Network, who said that their arrest amounted to an attempt to “suppress” the news.

“This is sheer harassment and targeting of the press on behalf of the Tripura police and Tripura government to suppress us from reporting the facts of the case,” the network said.

In India, where tensions between the Hindu majority and Muslim minority have often turned violent, citizens and police are empowered to charge individuals over speech they feel offends religious sensibilities or could provoke sectarian violence.

The police in states run by the Bharatiya Janata Party, or B.J.P., often file cases against journalists, which has helped Mr. Modi’s government crack down on critics.

In the state of Uttar Pradesh, the police filed a case last year against four journalists who were traveling to the city of Hathras to cover the gang rape and killing of a 19-year-old woman from a lower caste.

A few months later, Uttar Pradesh filed a case against the founding editor of an online news outlet called The Wire for a Twitter post that reported on the death of a farmer killed in protests against agricultural laws on the outskirts of New Delhi.

In both cases, the journalists were accused of provoking communal enmity.

Mr. Modi’s government has also tussled with American social media giants in an effort to more strictly police what was being posted regarding its handling of the pandemic. Critics say the government is trying to silence its detractors.

Earlier this month, a group of lawyers and activists who went to Tripura to document the damage were charged with violating a contentious antiterror law. The lawyers have challenged the charges at India’s Supreme Court.

“Government can say anything,” said Ahtesham Hashmi, a member of the fact-finding team who has not been charged. “What can we do? We recorded videos from the ground. We saw signs of the violence wherever we went. People told us,” he said.

The violent backlash in Tripura to the attacks on Hindus in Bangladesh has stirred protests in New Delhi and as far away as Maharashtra in central India.

While some B.J.P. officials have criticized the violence, Mr. Modi himself has been largely silent.