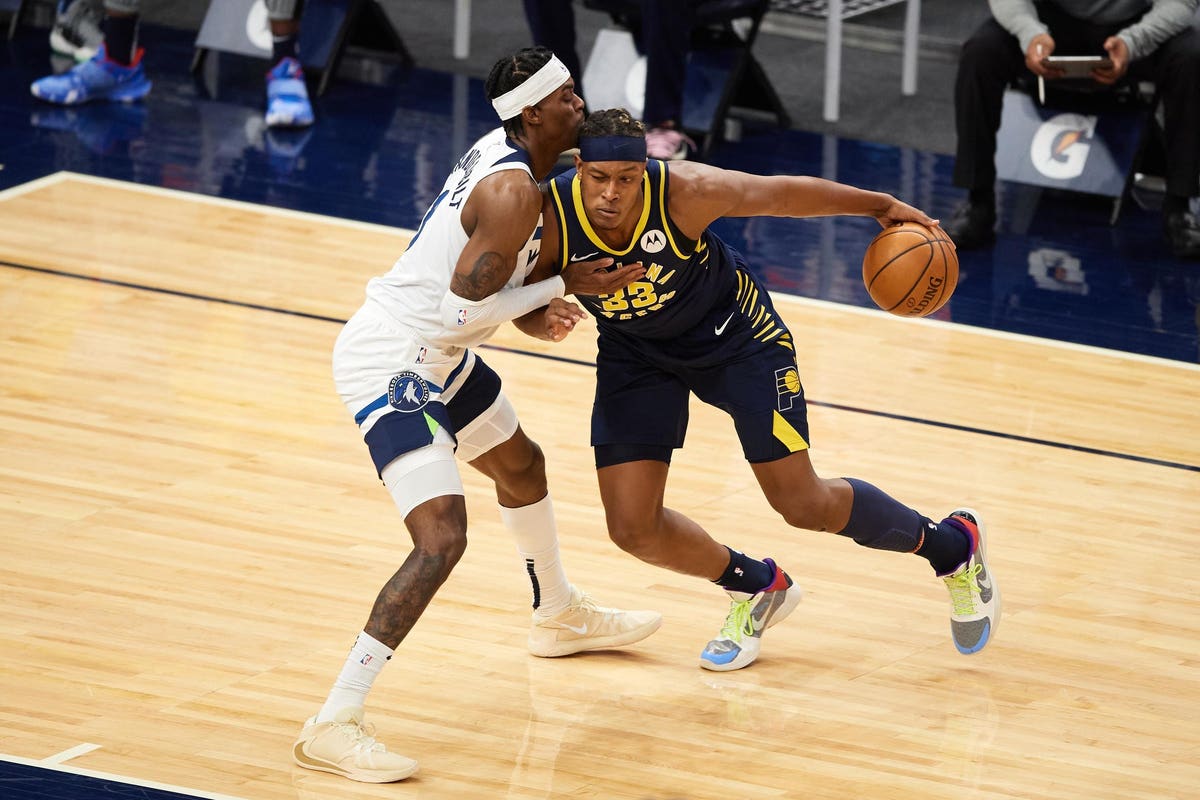 NBA free agency starts soon — so soon, in fact, that the time between now and the transaction frenzy can be measured in hours.

The Indiana Pacers enter free agency in a unique spot. The team has 11 players on a guaranteed contract for next season already, and the roster could have as many as 13 of its 15 spots filled before free agency even starts if the front office decides to keep Oshae Brissett and Kelan Martin. Much of the team is already constructed.

Additionally, Indiana is well over the salary cap line, and it would be difficult for the team to free up any useful cap room by making trades — even if the Pacers wanted to shake things up so that they could sign an expensive player, it would be nearly impossible. The organization won’t have much flexibility in free agency, and since the team is only about $13 million shy of the luxury tax line — a line that they likely won’t cross after a poor 2020-21 season — acquiring talent will be challenging.

But these constraints don’t mean the Pacers have no way of improving. They have free agent rights on two of their key guys who just had their contracts expire — Doug McDermott and T.J. McConnell — which means they can be retained on any reasonable contract even though the Pacers are over the salary cap. The luxury tax will make it hard for Indiana to keep both, but bringing back either one of those players will give Indiana a chance to be better next season than they were in 2020-21.

Adding more, external talent is also something the blue and gold will need to do. Fortunately, Indiana has a number of tools at their disposal that they can use to do just that this offseason. And all of them have different advantages that could be of use to the Pacers. Listing those tools, and explaining the advantages and disadvantages they could provide the Pacers, is a useful exercise to help determine what the blue and gold might do in free agency.

The mid-level exception (MLE) is a tool granted to teams that are over the salary cap. Teams only get one MLE, but there are multiple methods of using it, and those methods have different monikers.

One use of the MLE is called the non-taxpayer MLE. This version of the MLE provides front offices with a salary cap exception worth $9.5 million in 2021-22. It can all be used on one player, or it can be split across multiple free agents, and any deal signed using this exception can be up to four years in length.

Using the non-taxpayer MLE limits a teams spending at a number known as the apron. Any team that uses this salary cap exception cannot spend more than ~$141 million in total on its roster — such a team would be “hard capped” at that amount.

The taxpayer mid-level exception doesn’t hard cap teams at that aforementioned ~$141 million number, so many teams use up their taxpayer MLE and then stop dipping into this salary cap exception (they could spend more and use the non-taxpayer MLE after using the taxpayer version, but then a team would be limited by the apron). Being hard capped has other limitations, so teams tend to avoid it if possible.

The taxpayer mid-level exception allows teams to sign a player to a contract that is up to three seasons in length and starts at a maximum of $5.9 million. It can be split up amongst multiple players.

The Pacers have their MLE this offseason, and it is the front office’s strongest tool they can use to add a player without giving up assets in return. The Pacers likely don’t want to be hard capped, so the team is more likely to use the taxpayer mid-level exception than the non-taxpaying version. Though for the right player, any team would be willing to dip into the larger pool of money.

A few players that it would make sense for the Pacers to target if they use their non-taxpayer mid-level exception: Patty Mills, Danny Green, Reggie Bullock, and Paul Millsap.

A few players that it would make sense for the Pacers to target if they use their taxpayer mid-level exception: Otto Porter Jr, Nicolas Batum, Torrey Craig, JaMychal Green, and Jarred Vanderbilt.

One way for any team to improve, including the Pacers, is by making trades.

Trades are pretty straight forward. If two organizations can agree upon a deal that would swap a combination of players and other assets, then they will make a trade. There are rules about how much salary a team can receive in a deal based on how much they send out, so trades are a bit complicated. But if two sides are motivated to make a deal, then usually something can get done.

The Pacers could make use of trades to improve in numerous ways. One straightforward way would be to trade a player and a small asset (a draft pick, cash, or a young player) in exchange for a better player. This happens often in the NBA, and there are an incalculable number of ways to accomplish it. The Pacers could look for upgrades at any position, in theory.

Another way Indiana could use trades is by doing a salary dump. Occasionally, front offices will send unwanted contracts to teams with cap space or trade exceptions, since such a team doesn’t have to send back roughly equivalent salary in return. This allows the team sending away an undesired contract to free up more room for spending in free agency. If the Pacers were able to trade away Jeremy Lamb, for example, and take no money back in return, then the organization would be able to spend much more money on free agents without surpassing the luxury tax line. However, to get such a deal done, the blue and gold would likely have to send a small asset along with Lamb to his new team in order entice the receiving organization to take on unwanted money. Lamb is the most likely player on the Pacers to get moved in this way.

Sign-and-trades are also an option for the Pacers, though they require a ton of moving parts. In a sign-and-trade, a team uses their free agents rights on a player to sign said player to a contract that they wouldn’t be able to ink with another team, then immediately sends that player away to a new team in exchange for assets. For a sign-and-trade to take place, typically the player being sent away needs to be good enough that they are worth more than the mid-level exception. Otherwise, any other team would have the spending power to acquire such a player. The Pacers could, in theory, make use of a sign-and-trade to get an asset in exchange for Doug McDermott. That said, Indiana would have to take back some money in such a deal so it’s a difficult framework to create.

The most likely trade strategy that the team from the Circle City would use is the first one listed — trading a player for a different yet better (or better fitting) player. When looking at the Pacers roster construction and salary cap situation, Goga Bitadze and Myles Turner seem to be the most likely players to be moved in such a trade. That said, the Pacers shouldn’t make a trade just to shake things up. They have a solid core.

A handful of guys that could be on the move via trade this offseason are Buddy Hield, Kemba Walker, Terrence Ross, and Eric Bledsoe. It is unclear if the Pacers have interest in any of those players, but many trade talks begin after teams are forced to change their strategy in free agency.

Occasionally, when a team takes in less salary than it sends out in a trade, it creates a traded player exception (TPE). A TPE allows teams to take in a player in a trade whose contract fits within the TPE without sending back any salary in return.

The Pacers have two TPEs — one was created in the T.J. Leaf for Jalen Lecque trade, and the other in the Victor Oladipo/Caris LeVert swap. The value of a TPE is equal to the difference in salaries sent out in a trade, so the blue and gold generated a roughly $2.8 million TPE in the Leaf deal and an approximately $4.8 million TPE in the Oladipo exchange. As a result, Indiana can acquire a player making that much money (or less) in 2021-22 without sending back salary in return. The TPE counts as the matching salary.

The traded player exception from the Leaf deal expires on August 9th while the TPE created from dealing Oladipo expires on November 22nd.

The Pacers can use these traded player exceptions to acquire a player who makes less than the amount of the TPE in a deal. However, finding players who have a salary that fits within the Pacers traded player exception(s) and makes sense as a target for the team is difficult. A few that are plausible are Jake Layman, Danuel House, and Jabari Parker.

The bi-annual exception (BAE) is similar to the MLE — it is a tool that teams over the salary cap can use to add players.

There are a few differences, though. The BAE is much smaller, the maximum first year dollar amount for a player signed using the BAE in the offseason will be approximately $3.7 million. Additionally, using the BAE in any form makes a team subject to the aforementioned hard cap.

The BAE, like the MLE, can be divided across more than one free agent. Any contract signed using the BAE can only be one or two seasons in length. Additionally, if a team uses the BAE, they are permitted from using it again in the following offseason. There is a benefit to being patient with this exception.

Players that cost this little but are clearly worth more than a minimum value contract are hard to identify, but a few that would fit the Pacers needs are Maurice Harkless, Garrett Temple, and Ersan Ilysova.

Outside of being subject to the apron, teams can add free agents on a minimum contract at any time. Players have different minimum salaries based on the number of seasons they have been in the league, but the most a minimum salary player can count against the salary cap in 2021-22 is $1.669 million.

Dozens of guys are available for the minimum at all times, so the Pacers can pick anyone who they believe fits their team. A few free agents that would makes sense in Indiana on a minimum deal are James Johnson, Ben McLemore, Isaac Bonga, and Raul Neto.

While the Pacers may have some budgetary restrictions this offseason, they still have many tools they can use to get better. Even though most of the Indiana roster from last season is set to return, small upgrades are possible. And the Pacers, who want to win but finished under-.500 last season, need to use these tools to their advantage. The team needs all the help it can get.