Why Hasn’t The FDA Fully Approved Any Covid-19 Vaccines Yet? 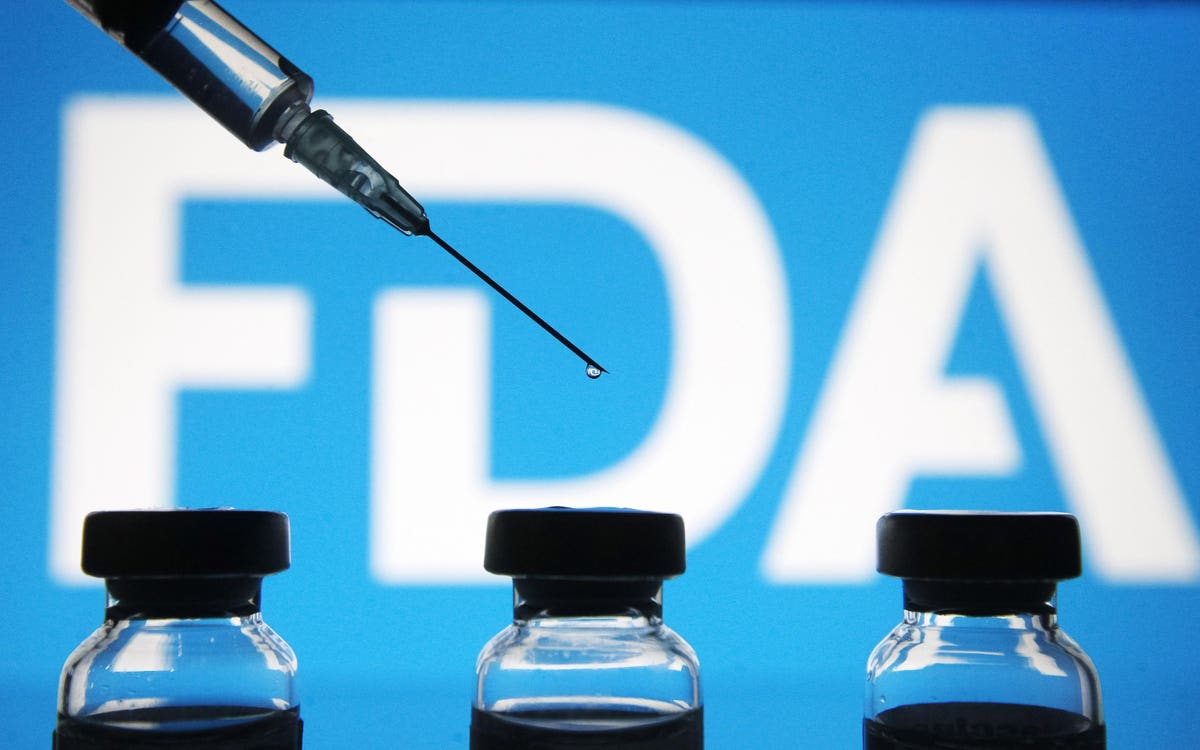 It’s a long and arduous process that requires tons of data. Plus, the agency wants to rebuild trust after coming under attack during the Trump Administration.

While nearly 190 million Americans have received at least one Covid-19 vaccine dose—57% of the population aged 12 and over—and there’s a nationwide campaign to encourage vaccination, the federal government hasn’t yet fully approved Covid-19 vaccines. Rather, the vaccines are currently authorized for “emergency use.” For some people, especially those who may be on the fence about getting vaccinated, it’s a distinction with a major difference. The word “emergency” invokes concerns about safety and the vaccines being experimental, despite existing and continuously growing clinical evidence showing the vaccines are safe and effective for people aged 12 and older.

Getting the shots into the arms of Americans who want the vaccine was the easy part. But now, as the country has entered into more difficult territory, a growing chorus of critics are calling on the FDA to grant full approval if it will help swing the undecideds towards getting vaccinated themselves. But given the politicization of the pandemic response under former President Donald Trump, there’s also concern that moving too quickly could erode trust in vaccines just when America needs it most.

What’s the difference between emergency authorization and full approval?

Way back in January 2020, not knowing the full extent of the threat posed by Covid-19, the Health and Human Services Secretary declared a U.S. public health emergency. This action gave special power to the FDA to authorize medicines, vaccines and tests for use by the American public to fight the virus in an expedited fashion without going through the lengthy full approval process. The amount of data required for what’s known as an emergency use authorization, or an EUA, is at the discretion of the FDA.

The main thing the FDA considers with emergency authorization is, based on the scientific evidence available, that “it’s reasonable to believe that the product may be effective and that the known and potential benefit outweigh the known and potential risks,” explains Nicholson Price, a professor of health law at the University of Michigan Law School in Ann Arbor. The medicine or vaccine also needs to be unique, there can’t be an existing alternative that’s already been approved. For vaccines, manufacturers were required to provide safety data that was “much closer to what a company would need for full approval for the vaccine,” he says. For emergency authorization, the FDA required two months of safety data versus six months for full approval, he explains.

Pfizer/BioNTech received emergency use authorization for its vaccine in December 2020, followed by Moderna a week later and Johnson & Jonson in February 2021. “It’s close to incontestable that the EUA process made a huge positive difference in combating COVID-19 at least with respect to vaccines,” says Price. It meant that people could start getting shots in December rather than waiting much longer for full approval. “Those months made a huge difference.”

Getting full FDA approval for a vaccine is a time consuming process that can take up to 10 months under normal circumstances. Both Pfizer and Moderna have applied for special designations to fast track approval for a serious and unmet medical need, which means it could take 6 months. Johnson & Johnson has yet to submit its application, but plans to do so later in 2021.

To begin the process for FDA approval, a company must submit what’s known as a Biologic License Application (BLA) that includes hundreds of pages of documentation, including preclinical and clinical data, manufacturing processes and facilities, safety reports and more. Since it takes so long to collect all of this data, some companies are allowed to ask for a “rolling review,” which means that they can hand portions of the application to the FDA as they are available. Both Pfizer and Moderna are using the rolling review program, which involves meeting frequently with FDA regulators to update them on new clinical trial data and manufacturing developments as they occur.

“I think a lot of us are baffled why the FDA is taking so long.”

Pfizer submitted its application on May 7 and was granted special priority review status on July 16. In a press release, the company said the decision whether to fully approve the vaccine should come by January 2022. Other reports suggest Pfizer’s approval will likely be sooner, possibly as early as the start of the school year. Moderna submitted its application on June 1 and has not yet been granted priority review. “The FDA recognizes that vaccines are key to ending the COVID-19 pandemic and is working as quickly as possible to review applications for full approval,” an FDA official said in a statement. “Although an authorization is not an FDA approval, the FDA conducted a thorough scientific evaluation of each of the authorized vaccines and can assure the public and medical community that the vaccines meet FDA’s rigorous standards for safety, effectiveness, and manufacturing quality.”

Why is the process taking so long?

It takes the agency at least six months, if not longer, to review all the supporting documentation related to an application to reach a decision. As you might expect, clinical trial data is scrutinized, but the process involves more than just experts reading data. The FDA also inspects manufacturing facilities and meets many times with company executives. Despite the time and labor intensive process, some experts say the agency is moving too slowly. Ashish Jha, dean of the Brown University School of Public Health, called on the FDA to pick up the pace on Good Morning America last week. “I think a lot of us are baffled why the FDA is taking so long,” he said.

Unfortunately, approving the vaccines isn’t just about science and evidence — the FDA also has political hurdles to overcome. Last year, former President Trump criticized the agency over its request that vaccine developers submit at least two months of safety data for emergency use. He also accused the agency numerous times of conspiring against him in the 2020 presidential election. This political interference sowed public doubt in some conservative circles, as people questioned the tactics of the normally science-focused agency.

“I think the FDA realizes what’s at stake here and they’re working round the clock to do it.”

It also doesn’t help that the FDA has made some unpopular decisions lately, such as approving controversial Alzheimer’s drug Aduhelm despite scientists saying that there is a lack of evidence that it works, an approval that’s led to a now ongoing investigation by the Office of the Inspector General.

With all of these political forces converging, it makes sense that the FDA wants to be deliberate about the vaccine approval process in an effort to regain the public’s trust. Paul Offit, a physician who directs the Vaccine Education Center at Children’s Hospital of Philadelphia, says, “I think the FDA realizes what’s at stake here and they’re working round the clock to do it.”

To that end, the agency has reportedly expedited the process, even deprioritizing other projects in order to accelerate the timeline. When asked about this last week, President Biden said that he expects the agency to grant full approval to Pfizer’s vaccine in the Fall, possibly as early as the end of August.

Why do the vaccines even need full approval?

There are many reasons why it’s better for the company—and the public—to have full approval of a vaccine. For one, full approval bolsters the public’s confidence, as it means that the vaccine has gone through an ultra-rigorous process to look at safety and effectiveness. The emergency use authorization process is rigorous as well, but full approval looks at more data over a longer period of time. There are benefits for the company as well: public health emergencies have time limits, meaning the vaccine would no longer be able to be sold once it’s over. Full FDA approval means the drug can be used at any time for as long as it is approved.

“A lot of people are getting their news about the Covid-19 vaccine from cable news, so there may be an impact there, but in terms of trusted messengers, it’s always been doctors.”

There’s also the issue of exclusivity, which is sought after by pharmaceutical companies to maximize their return on investment. Once a vaccine is fully approved, the FDA will no longer grant new emergency use authorizations for similar products. “Companies getting into the vaccine game right now probably won’t be able to get an EUA unless they have a substantially different product,” says Price. There’s also a consideration for doctors, since they are able to prescribe fully approved drugs “off-label” at their discretion. As Price explains, right now there is no approved vaccine for children under 12. If the vaccine was fully approved, doctors could make the decision to prescribe it on a case-by-case basis to those under 12.

Will full approval encourage more people to get vaccinated?

Many public health experts think so. As more people get vaccinated, the population that remains is increasingly filled with people who are either taking a “wait and see” approach to vaccination or may be flat out rejecting the vaccine. More than two thirds of adults have received at least one dose since the vaccines first received emergency use authorization in December 2020. In that time period, the percentage of U.S. adults in the “wait and see” category has shrunk from 39% to 10% in June 2020, according to a survey by the Henry J. Kaiser Family Foundation. Family and friends turned out to be the “most persuasive messengers” in convincing people to get vaccinated, says Ashley Kirzinger, associate director for public opinion and survey research at the Kaiser Family Foundation. “It was seeing their friends and family members get vaccinated with minimal or no side effects, or having family members pressure them to get vaccinated in order to safely gather,” she says. The group of people who say they will only get the vaccine if it’s required has remained pretty steady around 6%, as has the 14% of the population who say they will “definitely not” get the vaccine.

This “wait and see” group is also the one most concerned about the safety and side effects of the vaccine, she adds. While around half of U.S. adults were unsure of the regulatory status of the vaccines when it comes to full approval versus emergency use, the survey did suggest full approval would cause some undecideds to get vaccinated. Nearly half of the “wait and see” group and 8% of the “definitely not” group said they would be more likely to get vaccinated with full vaccine approval. “It still seems to be a pretty strong, persuasive argument,” says Kirzinger.

What the survey also shows is that messages about vaccination are most effective when they come from doctors well ahead of public regulators. More than 80% of people surveyed have a “great deal” or “fair amount” of trust in their doctor or their child’s pediatrician, while 69% put their trust in the FDA. “A lot of people are getting their news about the Covid-19 vaccine from cable news, so there may be an impact there,” she says, “but in terms of trusted messengers, it’s always been doctors.”