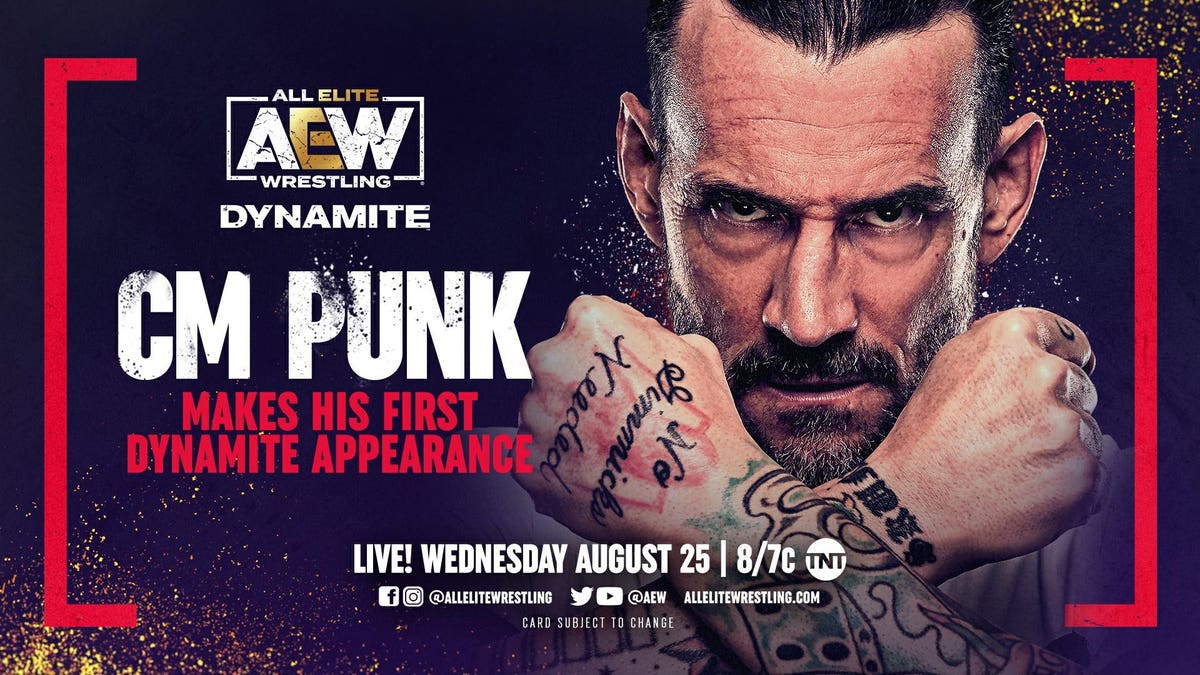 AEW Dynamite advertised the Dynamite debut of CM Punk, who returned to wrestling in an incredible moment at AEW Rampage this past Friday.

This was one of the hottest starts to an AEW Dynamite as Matt Hardy and Orange Cassidy exchanged leg kicks and “delete” chants.

This crowd went wild for Orange Cassidy hitting the Swanton Bomb on Matt Hardy with his hands in his pockets.

Matt Hardy might lead AEW in hard-way injuries as he appeared to break his nose in this match and was gushing blood.

Chris Jericho putting his career on the line at AEW All Out makes sense and I hope he wins. MJF already has three wins over Jericho, and he has enough notches in his belt having taken Cody’s right to challenge for the AEW World Championship and making Chris Jericho tap out.

The Lucha Brothers facing Jurassic Express and (hopefully) The Young Bucks over the next few weeks has potential to be the best two-match tag team wrestling run in AEW history.

I know he was trying to be a heel but I absolutely loved Nick Jackson’s Amazon Prime floral tracksuit.

I was watching this match closely for any Adam Cole easter eggs.

AEW needs to go back to the drawing board on Jamie Hayter’s theme music.

Red Velvet overcorrected on a suicide dive and then dared to go for another one right after, which landed perfectly.

Red Velvet was booed loudly for thwarting an outside interference attempt by Britt Baker.

Tony Schiavone noted CM Punk’s return was one of greatest moments we’ve ever witnessed, and it wasn’t ‘90s-era WCW hyperbole.

CM Punk’s response to Tony Schiavone’s first question was “I can’t hear you, Tony.” The CM Punk honeymoon period is very much activated.

CM Punk retired the name “Voice of the Voiceless” because “AEW fans have a voice and there’s people back there that listen.”

CM Punk had subliminals for WWE while talking up Darby Allin’s size.

As fans chanted “yes,” CM Punk hinted toward a Daniel Bryan return by telling them to be “a little more patient,” then shouted out his wife “April” (AJ Lee).

J.D. Drake, who previously wore a singlet that made him look like Kevin Steen’s stepdad, looked much more comfortable in pants and suspenders, like a young Big Bubba Rodgers.

Sting was working just as hard as anybody in this match while holding court on the outside.

Daniel Garcia should be proud of himself that he’s been in a feud with Jon Moxley and Darby Allin for multiple weeks.

Kenny Omega and Christian Face Off

Kenny Omega wore a t-shirt with a panther on it, and after weeks of CM Punk easter eggs, I’m still not sure if his panther shirt was an inside reference or not.

Edge asked Christian “you think you know me?”

Don Callis saying “hold my scarf!” was the least-threatening, most hilarious line of the night.

The Gunn Club def. The Factory

QT Marshall took the deciding pinfall, indicating he somehow has even less of a shot to beat Paul Wight at AEW All Out.

The Gunn Club was dressed in bright yellow which is a lot to take in from an entire Trios team.

Dan Lambert cut yet another flawless promo putting over the Men of the Year as real men and giving them more purpose than they’ve ever had as a unit.

It’s good AEW allowed Malakai Black to sit, crossed legged, in the middle of the ring even though CM Punk is back.

Poor Brock Anderson had to follow the best entrance in AEW with his own generic theme music and entrance.

There was five minutes left in the show by the time this match started, and I still think it was too much time.

I hate that Malakai Black, who returned to traditional black trunks, sold even momentarily for Brock Anderson.

Malakai Black stiffed Anderson with a savage right hand to the jaw.

Fans chanted “Black is gonna kill you” after Arn Anderson refused to throw in the towel.

Lee Johnson came to the aid of Arn Anderson and Brock Anderson and stared down Malakai Black. I wonder who’s going to win that match?