Winners, News And Notes As Will Ospreay Returns, Is Medically Cleared 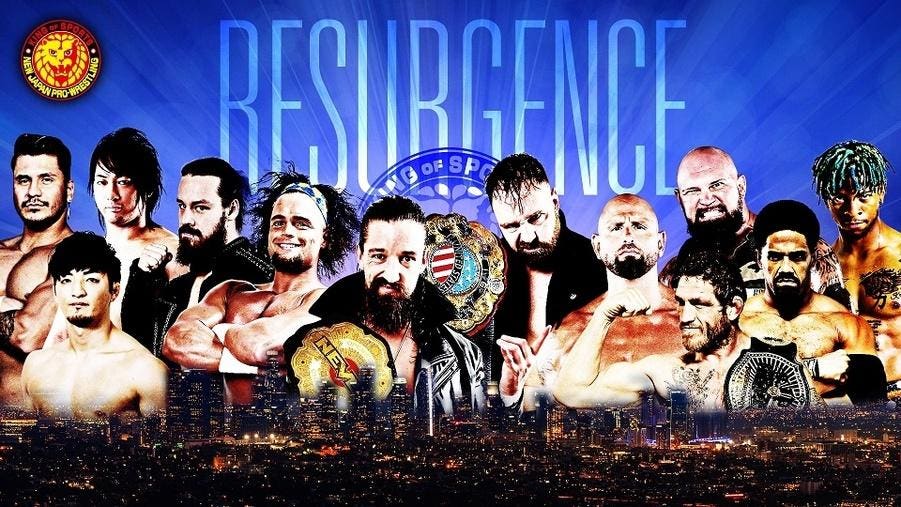 NJPW Resurgence advertised Jon Moxley with a mystery opponent vs. Karl Anderson and Doc Gallows, Jay White vs. David Finlay and Hiroshi Tanahashi vs. Lance Archer for the IWGP United States Heavyweight Championship. NJPW Resurgence also saw the surprise return of Will Ospreay, who noted he was medically cleared after only four months of recovering from back and neck injuries.

Ospreay teased a return to the G1 before noting. he will not be competing in the tournament, let alone for New Japan Pro Wrestling. Ospreay proceeded to call out Jon Moxley for not defending his IWGP United States Heavyweight Championship for a year, and also badmouthed NJPW IWGP Heavyweight Champion Shingo Takagi as an interim champion Ospreay then declared he is the real IWGP heavyweight champion, revealing his own polarizing new belt.

In its first live event before fans in over a year, NJPW Resurgence nearly sold out after putting over 2,000 tickets on sale inside The Torch at the Los Angeles Coliseum.

Karl Fredericks was every but the future superstar that much of the wrestling world thinks he is throughout this match. This crowd took to him almost immediately and he showed well as he continues to develop.

Rocky Romero was a huge star in this match, and the crowd was so thirsty to see him connect with his “Forever!” clothesline.

Ren Narita and Fred Rosser made the crowd come alive solely on the merits of a strong style exchange where they simultaneously struck each other with forearms.

Mr. No Days Off Fred Rosser is a completely different wrestler than Darren Young, and is somehow in even better physical condition.

Poor Clark Connors had to endure chants of “Cowboy S’’t!”

Lio Rush tagged in, ran wild on the opposing team and tagged out all in the span of about 15 seconds. Or maybe it just felt like 15 seconds because he’s so damn quick.

A “booty shorts!” chant broke out shortly after Tom Lawlor, and his Daisy Dukes, tagged in.

A young child behind me spent this whole match marveling at J.R. Kraidos, reputedly saying in disbelief “he’s so big! How did he get so big?!” This might have been his Mick Foley-Jimmy Snuka moment.

As the action broke down, incensed fans directed their ire at the referee and chanted “do your job” as well as “we want Red Shoes!” How long until chants like this make it to AEW when their referees are made to look clueless?

After this match, Yuya Lemura cut a brief promo, only to be followed by Katsuyori Shibata, who received the biggest reaction of the show to this point. Shibata simply said “come with me.”

Juice Robinson’s tan made him essentially the same skin tone as Hikuleo.

While in a rest hold, Juice Robinson easily popped the crowd by saying “I’ve got a helluva side headlock!”

The graphic of this match got a huge pop from this crowd, and as talented as Moose is, the excitement was solely drected toward Tomohiro Ishii.

Dare I say Moose had better, louder chops than Ishii?

As this match went on, Moose slowly got a good portion of this crowd on his side.

This was easily the match of the night to this point, and Moose’s stature is so much more impressive in person, especially given all the high-flying moves he can do.

Will Ospreay Returns, Declares Himself the Real IWGP Heavyweight Champion

Will Ospreay got a huge reaction and was in rare form as a superstar heel.

Will Ospreay cut a heel porom on the crowd and the Young Lions, whom he called Shibata’s little “b—-h boys.”

When Will Ospreay declared himself IWGP Heavyweight champion and revealed his belt, the crowd was anticipating the old IWGP World Championship, but sadly it was the controversial new design.

The early parts of this match were sabotaged by fireworks at the LA Coliseum, prompting Jon Moxley to get hot from the apron and also led to “a-hole” chants.

The fireworks quickly became the star of this match, and Jon Moxley eventually just had to hilariously shrug his shoulders.

I. was shocked that The Good Brothers got the win here in what was a deflating finish to a compromised match.

Karl Anderson’s Gun Stun (outro) theme music is superior to the entrance music they typically walk out to.

As if the match wasn’t plagued by enough technical difficulties, Karl Anderson’s mic died on him during a post-match promo.