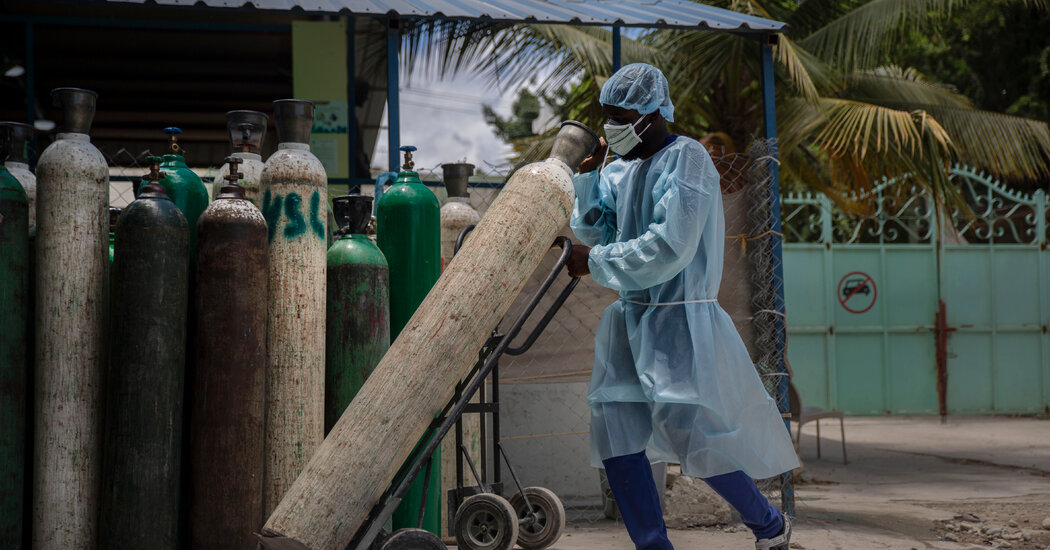 Haiti was spared the worst of the pandemic last year, but the coronavirus has returned to the poorest country in the Western Hemisphere with a fury. The nation’s leading newspaper is full of obituaries and hospitals are turning away patients.

The average number of new daily cases has more than doubled in the past two weeks to 153, according to data collected by The New York Times. For a population of about 11.5 million, that’s still relatively low, but many experts believe the number is an undercount because testing capacity is severely limited and many cases remain unreported.

And Haiti’s government has yet to administer a single dose of any vaccine.

Carissa Etienne, the director of the Pan American Health Organization, described the situation in Haiti as “a cautionary tale in just how quickly things can change with this virus.” At a news conference this month, she called for rapid escalation of treatment and preventive measures.

The surge has forced the Haitian government to re-establish a Covid-19 task force and request 130,000 doses of the vaccine from Covax, the global vaccine-sharing initiative, after previously refusing an offer.

At St. Luke Hospital outside Port-au-Prince, the capital, administrators issued an alert this month telling patients not to come because its wards were full. Over the past month, the hospital dusted off and restocked its Covid center, expanding from a handful of beds to 115. But there is only enough oxygen to treat 75 of the people who arrive gasping at the gates.

“You can’t let people have beds and have them staring at you with oxygen-starved eyes,” said the Rev. Richard Frechette, a Catholic priest and medical doctor who founded the hospital. “Our trouble is, we tell them to go somewhere else, when we know damn well there is nowhere else to go.”

Father Frechette said that perhaps 20 percent of patients were dying at the hospital. Two hours away, the University Hospital of Mirebalais has also seen a higher mortality rate, said Elizabeth Campa, a senior adviser to Zanmi Lasante, the nonprofit organization that supports the hospital. About 50 of its 75 Covid beds are full, she said.

“Everyone’s greatest fear is the surge will continue to grow,” Ms. Campa said.

A deteriorating political situation is further complicating the response to the virus. The capital has increasingly been clogged with protests demanding the removal of President Jovenel Moïse, who has ruled by decree for more than a year. Kidnappings and gang violence are on the rise, with one recent skirmish blocking the delivery of oxygen, according to the newspaper Le Nouvelliste.

“The big question is, what’s next?” Mr. Lemarquis said. He added that the hurricane season, which has often proved devastating in Haiti, officially started this month.

The Fed Can Neither Leave Out The ‘Punch Bowl,’ Nor Take It Away

The Fed Can Neither Leave Out The ‘Punch Bowl,’ Nor Take It Away