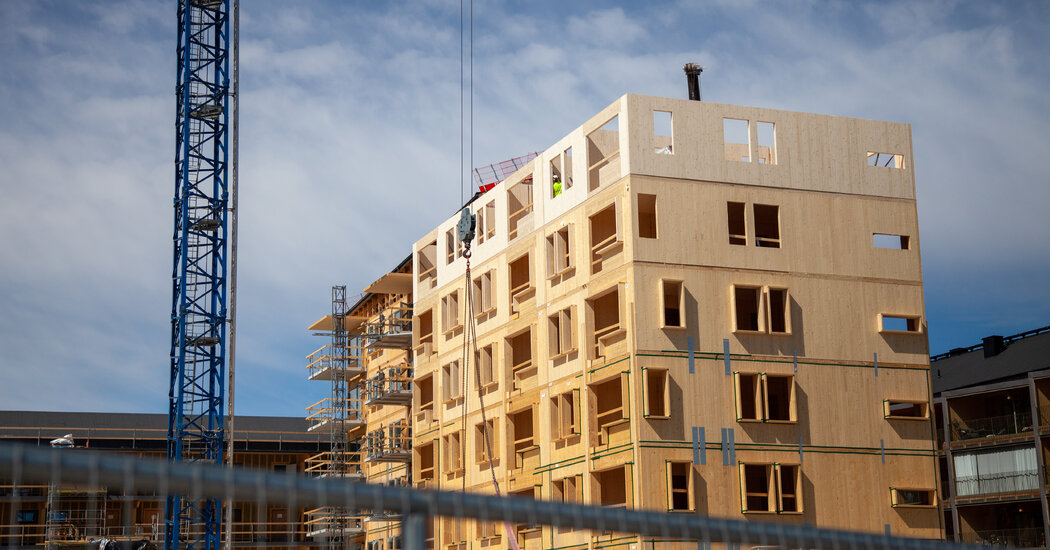 Before 1995, this sort of thing wasn’t even allowed in Sweden, the result of rules established many years ago after fires ravaged primarily wooden cities across Europe. But adoption of European Union rules meant an end to the former two-story building limit.

The technology has been steadily developing since then, to the point that those in the industry say fire risk is on par with other materials. Recognizing that, building regulations are now function-based rather than material-based, which is to say that as long as developers can prove the building withstands critical threats, like fire, it doesn’t matter what it is made of.

As for height, the sky is theoretically the limit, according to Folkhem executives. But, they add, because timber is lighter, it needs added stabilization as it climbs. Above floors in the mid-teens buildings need added ballast, often in the form of concrete slabs.

As the technology progresses, that may change. The current record holder is an 18-story wooden building in Brumunddal, Norway. For scale, the building is just a little shorter than the Statue of Liberty.

All this works especially well in a place like Sweden which has well-managed forests, and plenty of them. Seventy percent of Sweden’s land is forest, double what it was 50 years ago.

One of the biggest apartment complex developments so far in Sweden, according to Folkhem, used around 211,000 cubic feet, or 5,975 cubic meters, of wood for the construction. That wood, the company said, was estimated to take around 20 minutes for the Swedish forests to regrow.

Building single family homes out of timber is, of course, nothing new. The majority of homes in Sweden are wooden, as in many places around the world. What is new is the push to build larger buildings, office structures or apartment blocks as well as infrastructure like bridges, using timber frames instead of concrete or steel. But although timber use is on the rise, concrete still dominates in the construction industry.