Would You Buy An Electric Car If It Looked Like This? 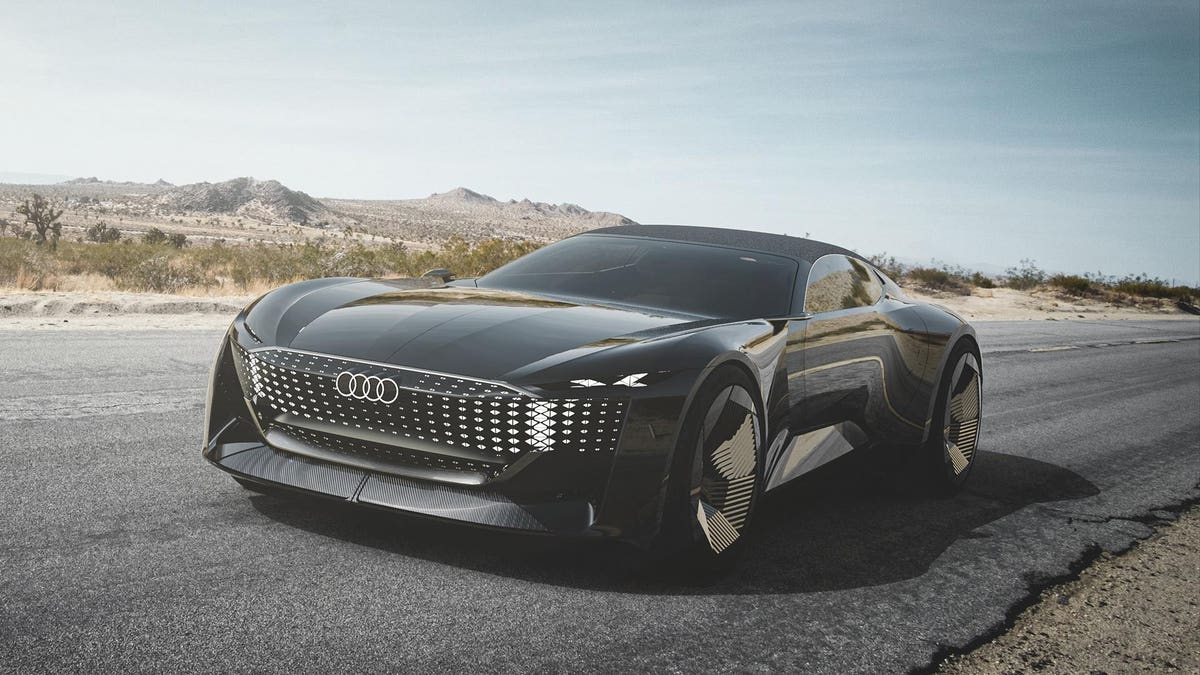 Electric vehicles have an image problem. Despite Tesla’s best efforts to make them “cool”, EVs are still derided by petrolheads/gearheads for their appearance and driving experience, often using slurs like “milk floats” and “golf carts”. With its latest concept, however, Audi is aiming for something much more desirable, but the electrification is not the most surprising thing about it.

The Audi skysphere concept was unveiled at Monterey Car Week yesterday, and the electric aspects are not that revolutionary. Audi mentioned a 465kW (624hp) motor, surprisingly just driving the rear wheels (not all four), and 80kWh battery providing a range of over 300 miles. Acceleration will be 0-60mph in 4 seconds, which seems pedestrian now that the Tesla Model S Plaid boasts a 60mph sprint of 2 seconds, and a Tesla Model 3 Performance can do it in 3.1 seconds. So far, so run-of-the-mill.

But then there is the design. The low-slung swoopy Batmobile-like looks are guaranteed to turn heads (assuming they make it out of the concept stage). The inspiration for the skysphere was allegedly the Horch 853 roadster of the 1930s, appropriate given that an example of this car won the Concourse d’Elegance in 2009 at Pebble Beach – where the Monterey Car Week takes place. The Horch is a rare car, and that show winner eventually sold for over $5 million in 2012. The inspiration was merely visual, however, as the new Audi is no classic car throwback.

The oddest things about Audi’s skysphere concept is that it has a variable wheelbase. The length of the car and distance between front and rear wheels can be adjusted by 250mm and the ground clearance by 10mm. This is more than just switching driving dynamics; it is also about mode. The shorter 4.94m version of the car provides a “Sports” mode for greater agility and driving experience. The 5.19m “Grand Touring” mode retracts the steering wheel and pedals, switching to an entirely autonomous driving system.

This isn’t such a radical idea, though. If you’re someone who likes driving, you will want a dynamic experience on windy roads. But you’re unlikely to enjoy sitting in traffic or interminable highway hauls. Functions like Tesla’s Autosteer or similar Level 2 or 3 capabilities (such as Audi’s Traffic Jam Pilot) are godsends for the boring bits of journeys. Tesla has long targeted its considerable in-car entertainment ability, bolstered in the latest Model S, at giving people something to do when the car is driving itself, even if you can’t yet use it while the car is in motion. The Mercedes EQS is also aimed at providing connected functions for occupants to use while the car is autonomously driving.

The Audi skysphere gets its name from the fact that it has an open top, and when it is in Grand Touring mode you can lie back and enjoy the scenery as the car drives itself. Audi even suggests you post about your trip on social media. The extra length in this mode provides more room for occupants to stretch out, making longer journeys more bearable. Audi even talks about the car handling its own charging, although quite how it will plug itself in isn’t discussed. Valet service maybe?

The Audi skysphere is apparently the first of three “sphere” concepts, with grandshpere and urbansphere cars still to come. The grandsphere has been teased, and is an A7-sized executive sedan, which will presumably go head-to-head with the Tesla Model S (a format that Audi and parent company Volkswagen have yet to tackle directly in electric form, although the Audi e-tron GT and Porsche Taycan are close). There are few details about the urbansphere, other than that it will be arriving in 2022.

Either way, it is reassuring to see some radical thinking with EV design from Audi, although how much of it will arrive in production cars is debatable. The Honda e is an exception. If you compare what the concepts of the EQS looked like to the car that has arrived, the latter is much more conventional. The key takeouts from the Audi skysphere are that an electric drivetrain is a given, and while some people will still want to enjoy their driving, a lot more of it will be autonomous in a few years’ time. Cars will increasingly be designed around this idea. We just hope Audi also manages to make EVs that look this cool.