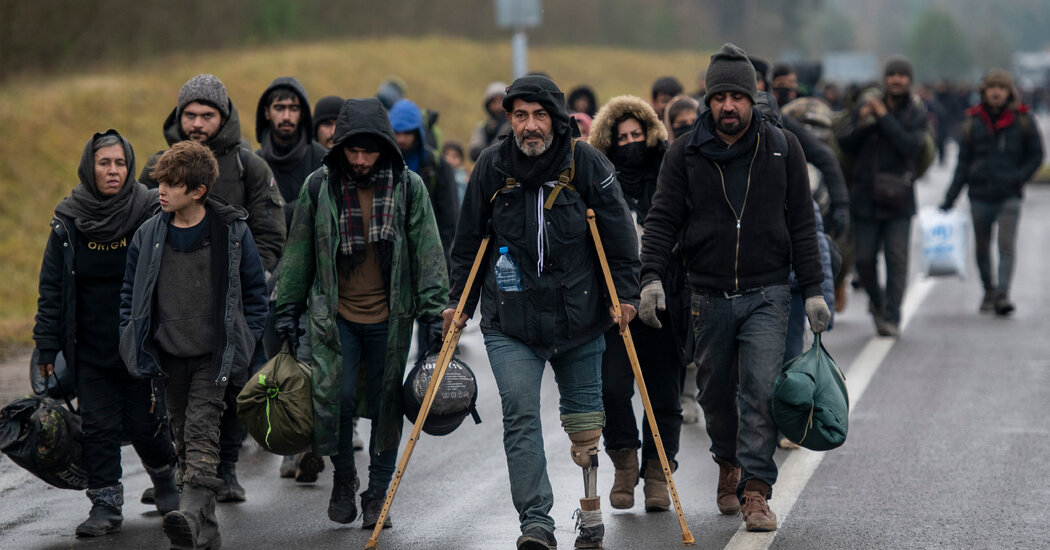 We’re covering the migrant camp closure at the Poland-Belarus border and the tennis world speaking out about China’s Peng Shuai.

As border camps close, where will the migrants go?

The migrant encampments at the main crossing into Poland from Belarus were cleared by the Belarusian government on Thursday, removing, for the moment, a major flash point that had raised tensions across Europe.

Some migrants were giving up and going home, despite spending thousands of dollars on a journey that they hoped would give them better lives. A plane repatriating migrants from Belarus landed in Iraq.

Thousands of Iraqis are believed to still be in Belarus. The authorities have given little indication of where they might go.

Western leaders were skeptical that Belarus’s moves would end the crisis, which they say was engineered by the country’s leader, Aleksandr Lukashenko.

Merkel’s role: The decision by Belarus to clear the camps followed a phone call from Chancellor Angela Merkel of Germany with Lukashenko on Wednesday. Leaders of Poland and the Baltic nations have said that engaging with Lukashenko would offer him legitimacy.

After the Grand Slam doubles champion Peng Shuai made a #MeToo accusation against one of China’s top leaders, she disappeared from public view.

The Chinese authorities have for weeks sought to suppress any mention of her story, and the latest attempt to assuage public anger was to release an email purportedly written by Peng. Critics and tennis officials immediately dismissed as a fraud.

The email said that the assault accusations were not true and asked officials who run women’s tennis to stop meddling. The Women’s Tennis Association executive director responded, saying, “I have a hard time believing that Peng Shuai actually wrote the email we received or believes what is being attributed to her.”

Stars weigh in: Some of the world’s best-known tennis players have also joined in drawing public attention to Peng. Naomi Osaka wrote, “Censorship is never OK at any cost.”

Related: President Biden said that the U.S. was considering a diplomatic boycott of the Winter Games in Beijing to protest human rights abuses.

A thick blanket of noxious haze has settled over New Delhi, burning eyes and lungs, forcing schools to close and prompting calls from residents for action. India’s leaders have responded by pointing fingers at one another.

The central government is accusing city officials of inaction, and vice versa. The Supreme Court stepped in to shutter factories and order farmers to stop burning fields. But few measures have been taken despite years of calls.

Delhi’s emergency rules went into effect this week, including bans on construction activity, diesel generators and trucks, school closures, and the closures of six power plants outside New Delhi.

Context: Broadly, India’s air quality suffers from its appetite for fossil fuels, which has only grown after two decades of rapid economic growth.

A collective of women is bringing sex education to the Arab world, shattering myths and misinformation, and in some cases changing women’s lives. ​ In Cairo, Nour Emam started a podcast on sexual and reproductive health; the first episode, on orgasms, drew tens of thousands of listeners.

Of all of the things that people list as providing meaning in their lives — family, community, careers, health — many of the answers from around the world are what you would expect.

Most people in a Pew Research Center survey of nearly 19,000 adults in 17 wealthy countries released on Thursday said that family and children made them the happiest, with work and careers coming in second.

But the priorities among cultures and income groups, and the effects of the pandemic, shed light on how people form values.

For instance, the emphasis placed on family and careers varied: In Australia, 56 percent of respondents said they found meaning in their family. New Zealand, Greece and the U.S. followed closely behind. People in Taiwan and South Korea ranked family third. Australians were the most likely to bring up friends as a source of meaning.

In Italy, 43 percent of people mentioned work and their careers as a major source of meaning. But respondents in South Korea ranked it third, and in Taiwan it did not even rank it in the top five most important aspects of life.

Many shared their appreciation for “the little things” in their lives. “Living in the country with animals, my loving partner, family and chocolate,” said one woman from Britain. A respondent in Italy summed it up this way: “Love, children, work, dogs.” — Melina

The latest episode of “The Daily” is about a disconnect between the state of the U.S. economy and how Americans perceive it.

You can reach Melina and the team at [email protected].