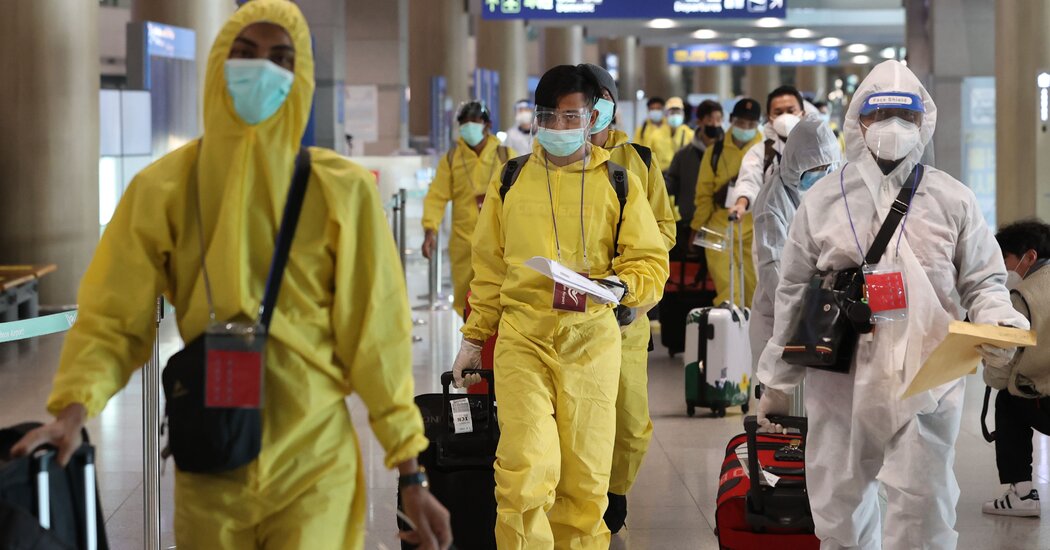 The world responds to Omicron

The new coronavirus variant named Omicron by the W.H.O. is showing up across the world, prompting stock market tumbles and border closures. It has so far been identified in Britain, Germany, Hong Kong, Italy, the Netherlands and other places, usually in people who had recently returned from southern Africa. Here’s a map of cases.

Nations in southern Africa protested bitterly as more of the world’s wealthiest countries cut them off from travel, renewing a debate over pandemic border closings and compounding the problems facing poorly vaccinated countries. Australia, Britain and the E.U. were among those that barred travelers from South Africa and nearby countries.

Scientists scrambled to gather data on the variant. Early findings suggest Omicron may be more transmissible and better able to evade the body’s immune responses than previous versions of the virus. But vaccines may well continue to ward off severe illness and death. Pfizer-BioNTech and Moderna are preparing to reformulate their shots if necessary.

What’s in a name: The W.H.O. skipped two Greek letters in naming the variant, avoiding Nu, too easily confused with “new,” and Xi, a common Chinese surname and the name of China’s leader.

Supply shortages continue to bedevil Britain, causing the government to fret about disruptions to the holidays. A lack of truck drivers, combined with global shipping delays, product shortages, the pandemic and Brexit restrictions, has left some supermarket shelves bare and retailers warning that not every Christmas gift will be available.

An offer by the British government to grant 5,000 temporary visas to truck drivers from continental Europe has had little appeal to Polish drivers, who say they can make comparable money in less-xenophobic European countries closer to home. As of mid-October, a Conservative Party official said that a little more than 20 applications had been approved.

To reduce the reliance on truck drivers, some have come up with creative solutions. Every weekend, a 32-car, 1,600-foot “wine train” travels 100 miles between the port of Tilbury and Daventry, carrying almost 650,000 bottles of wine to distribute to stores. Britons might at least have a decent stock of alcohol during Christmas.

Talking turkey: Companies in the Food and Drink Federation had been used to 97 percent of their orders arriving on time. Now, one-fifth of items will not show up when expected — and which ones will be missing from the holiday table is anyone’s guess, the group’s chief executive said.

A broadening cyberwar between Israel and Iran

The longstanding covert cyberwar between Israel and Iran is expanding past military targets, as millions of civilians bear the brunt of the shadow campaign. No one has died in the latest attacks, but if their goal was to create chaos, anger and emotional distress on a large scale, they succeeded wildly.

In recent weeks, a cyberattack on Iran’s nationwide fuel distribution system paralyzed the country’s 4,300 gas stations, which took 12 days to have service fully restored. And in Israel, the intimate details of hundreds of thousands of people’s sex lives were stolen from an L.G.B.T.Q. dating site and uploaded on social media.

As hopes fade for a diplomatic resurrection of the Iranian nuclear agreement, such attacks are likely to proliferate. Nondefense computer networks are generally less secure than those tied to state security assets.

News from the region: Iran violently cracked down on protests against growing water shortages as the vast majority of the country confronted drought.

The woman on the bridge: The police and prosecutors spent five years chasing a domestic violence case. Would it be enough?

The arts and fashion worlds this weekend lost two greats. Stephen Sondheim, one of the most influential songwriters in the history of musical theater, died at 91 early Friday. And on Sunday, Virgil Abloh, the barrier-breaking Black fashion designer, died at 41 after a two-year battle with a rare cancer.

Several youngsters are winning praise this season for their roles in prestige drama — among them Jude Hill, who stars as Buddy in “Belfast”; Saniyya Sidney and Demi Singleton, who play Venus and Serena Williams in “King Richard”; Woody Norman, who appears with Joaquin Phoenix in “C’mon C’mon”; and Daniel Ranieri in the George Clooney-directed drama “The Tender Bar.”

For The Times, Sarah Bahr spoke to these young stars about their time in the limelight. Here are edited extracts from their conversations.

Jude Hill, 11: The first time I saw my face on a poster I thought, “That’s not real.” I’m still just a normal kid, and this is my first film, but I think if you work hard, then you can achieve anything.

Demi Singleton, 14: Any role that highlights how powerful women can be is a role I want to be in. I also really want to do an action movie like “Wonder Woman” or “Black Widow,” because that’s been my dream ever since I was a little girl.

Daniel Ranieri, 10: I didn’t always want to be an actor. I wanted to be a race driver, and then I changed my mind and wanted to be a firefighter, but now I’m really stuck on being an actor.

Woody Norman, 12: What I want people watching the film to take away is that young people are humans with opinions just as valid as yours. We are not children or babies.