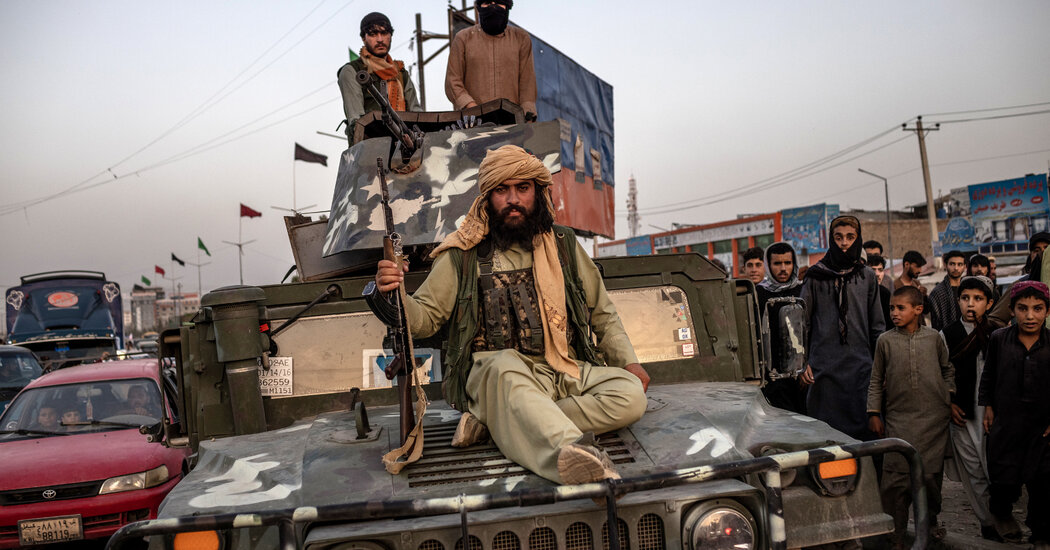 Good morning. We’re covering the Taliban’s victory in Afghanistan, a new lockdown in Australia and an exodus of pro-democracy officials in Hong Kong.

Afghanistan falls to the Taliban

The government collapsed on Sunday after President Ashraf Ghani fled for Uzbekistan with his wife. Here are live updates.

The insurgents met little resistance as they entered Kabul. The capital devolved into panic and confusion. Inmates broke out of the main prison and Afghans made a mad dash to banks. Thousands crammed into the civilian domestic terminal at the airport, desperately seeking flights out. Here are pictures.

Insurgents and Afghan officials assured residents that there would be a peaceful transfer of power.

But the U.S. raced to evacuate diplomats and civilians in helicopter after helicopter. A core group of diplomats were moved from the embassy to a compound at the international airport.

Women: “If the Taliban take over, I lose my identity,” Wahida Sadeqi, 17, said. The group will likely strip women of their rights and crack down on education for girls. On Sunday, in Kabul’s city center, people painted over posters of women at beauty salons, apparently preparing for a fundamentalist takeover.

A new lockdown around Sydney

Officials in New South Wales announced statewide stay-at-home orders, which will be in effect for at least a week, as the Delta variant fuels outbreaks. On Saturday, the state recorded 466 new cases, its highest daily total of the pandemic.

The virus has spread from Sydney to nearby towns and vulnerable Aboriginal communities. Officials blame city residents who violated a seven-week-long lockdown.

Now, Sydney residents will need a permit to travel outside the city. Some schools will close. Travel for exercise and essential shopping will be limited to five kilometers from home. And officials increased fines for violations that include lying to contact tracers.

Vaccines: Vaccination rates are increasing, as community members join grass-roots efforts to accelerate immunity. At the current pace, 70 percent of Australia’s population older than 16 will have received at least one dose of a Covid vaccine by Sept. 25.

In 2019, pro-democracy politicians won nearly 90 percent of seats in local council elections, inspiring hopes of change. Now, fear of retaliation from Beijing has driven more than half of them to quit.

District councilors are the lowest rung of elected official and only entered the political limelight amid widespread protests. Day-to-day, they handle unglamorous tasks such as dealing with pest infestations, overflowing trash and illegal parking.

But Beijing has since trained its attention on the councilors after they took on outsize importance two years ago. Now, the councilors said, they were alarmed by the government’s plans to impose a new loyalty oath. They also fear reports that perceived violations could leave them imprisoned, barred from politics or bankrupted.

Quotable: “Before, we had a lot of hope and anticipation,” said Zoe Chow, an elected district official who resigned in July. “Now, it feels like our hands and feet are tied.”

Analysis: The authorities are effectively burying Hong Kong’s last vestige of democracy, and have rewritten election rules to bar candidates they deem disloyal.

Montenegro spent almost $1 billion on a Chinese-built highway that peters out in the middle of largely uninhabited woods. Its government now owes Beijing debts that total more than a third of Montenegro’s annual budget.

Understand the State of Vaccine and Mask Mandates in the U.S.

The Tokyo Olympics ended on a celebratory note and the Paralympics start next week, but Japan is still struggling. Coronavirus infections are at a high, and just 36 percent of residents are fully vaccinated. To get a sense of the post-Games mood, we spoke to Motoko Rich, our Tokyo bureau chief.

There is a sense of cognitive dissonance. In the morning when I watch the news, commentators talk about an increasingly urgent sense of crisis. But the streets and trains are fairly busy. People are going to work in offices and eating lunch in restaurants, drinking coffee in cafes and shopping in stores, though nearly everyone wears a mask.

Polls found that the Japanese public did not support these Olympics at the start. Did people warm to them?

Once the Games started, public sentiment softened. There were still protests throughout the Games. But for many, it seems the drama of the Games diverted people’s attention away from their pre-Olympics anxiety.

What do you think will be the legacy of this year’s Games?

I am guessing there will be a reckoning for the entire Olympic movement about the cost and sacrifices of serving as a host city. An increasing number of countries are pulling out of bidding for the Games. And with both the likelihood of future pandemics and the reality of climate change hovering over everything we do, those forces are inevitably going to shape future Games.