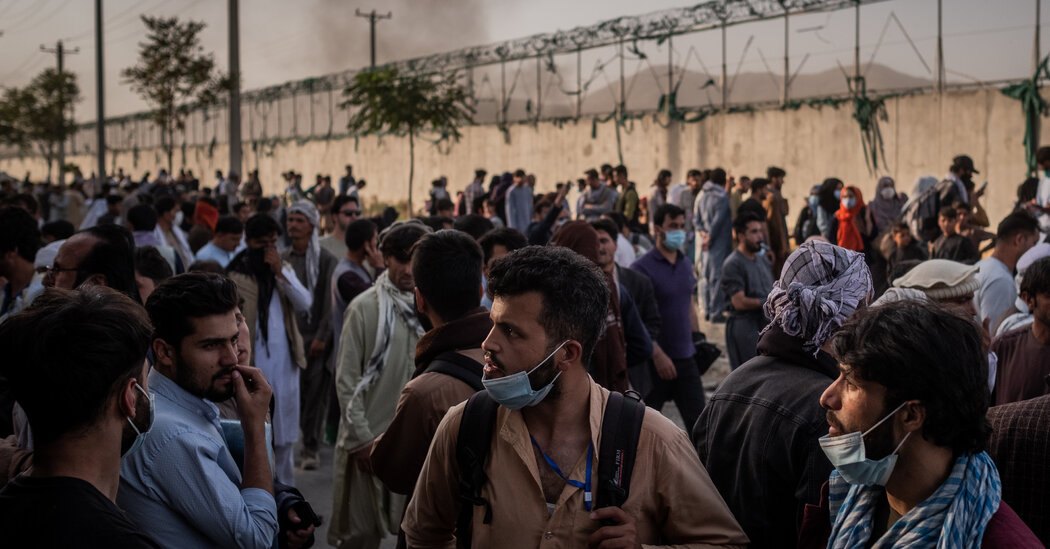 We’re covering a race against time in Afghanistan and Navalny’s first interview in prison.

A rush to evacuate from Kabul

Time is the enemy for those trying to evacuate people out of Afghanistan before the Aug. 31 deadline.

U.S. and allied planes have flown 19,200 people out of Kabul in the past 24 hours, officials said on Wednesday. But thousands of U.S. citizens are believed to remain. Tens of thousands of Afghans who qualified for special visas are also waiting.

Experts estimate that hundreds of thousands of Afghans will be targeted by the Taliban if they stay, including Afghan security forces, government officials and women’s rights advocates.

The biggest immediate threat as the U.S. steps up its evacuation operation comes from the Islamic State Khorasan, or ISIS-K.

Protecting women: A Taliban spokesman told women to stay home because fighters had not been trained to treat them well. In Germany, Chancellor Angela Merkel called for talks with the Taliban to preserve progress, including better health care for women and greater access to clean drinking water.

Refugees: At least 51 people who fled Afghanistan landed in Uganda on Wednesday, the authorities said, the first to arrive on the African continent. Also, read about Mexico’s role in rescuing journalists in our Arts and Ideas section below.

Navalny on life in prison

In his first interview from jail, the Russian opposition leader Aleksei Navalny described the psychological pressure that political prisoners are subjected to, and his conviction that “Putin’s regime,” as he calls it, is doomed to collapse.

“You need to imagine something like a Chinese labor camp, where everybody marches in a line and where video cameras are hung everywhere. There is constant control and a culture of snitching,” Navalny said in a written exchange with The Times.

He is forced to watch Russian state TV for eight hours a day, he said, part of a so-called awareness raising program that has replaced hard labor. Doing anything else during that time is prohibited, Navalny said. Otherwise, he sweeps the prison yard, reads letters in his cellblock or makes snacks with the other inmates.

Post-Putin Russia: Despite his circumstances, Navalny was upbeat about prospects for change in Russia. “Sooner or later, this mistake will be fixed, and Russia will move on to a democratic, European path of development. Simply because that is what the people want.”

The interview: Navalny is serving a two-year sentence that could be extended in a penal colony east of Moscow. He provided written answers to questions. The 54 handwritten pages are by far his most comprehensive and wide-ranging account.

The director of national intelligence delivered a much-awaited report to President Biden on Tuesday on the origins of the coronavirus epidemic, but there were no firm conclusions.

The country’s spy agencies have not yet determined whether the disease was the result of an accidental leak from a Chinese lab or if it emerged naturally from an animal-to-human spillover, according to U.S. officials. For now, the report is classified but parts of it are likely to be available soon.

Biden had ordered the report in part to give the agencies a chance to fully examine the data on the outbreak that originated in Wuhan, China. The absence of conclusions underscores the difficulty of pinpointing the source of the virus, particularly given China’s refusal to continue to cooperate with investigations.

The “window is rapidly closing” to gather crucial evidence, a group of scientists studying the origins for the World Health Organization wrote. Studies of blood samples and wildlife farms in China were urgently needed, they said.

Beijing, nervous about the focus on a possible lab leak, has been peddling conspiracy theories blaming the U.S. What started out as a fringe theory suggesting that the coronavirus had escaped from a U.S. military lab in Maryland has been propelled to the mainstream by the ruling Communist Party.

A group of Afghans who worked for The New York Times touched down safely early Wednesday, along with their families — not in New York or Washington, but in Mexico City. Our media columnist wrote about Mexico’s role in the rescue of journalists.

The arrival of the 24 families was the latest stop in a harrowing escape from Kabul.

Mexican officials, unlike their counterparts in the U.S., were able to cut through the red tape of their immigration system to quickly provide documents that, in turn, allowed the Afghans to fly from Kabul’s embattled airport to Doha, Qatar. The documents promised that the Afghans would receive temporary humanitarian protection in Mexico while they explored further options in the U.S. or elsewhere.

“We didn’t have time in order to have the normal official channels,” Mexico’s foreign minister, Marcelo Ebrard, said.

While the United States has ramped up its evacuation flights, the politicized and bureaucratic American immigration system has struggled to meet the crisis. Processing the special visas that are available to journalists often requires them to spend at least a year in a third country, presumably to satisfy the forces warning that Muslim immigrants may be terrorists working under extremely deep cover.

The Mexican government is now looking to extend similar protections to other journalists and to women who are in danger in Afghanistan, the foreign minister said.