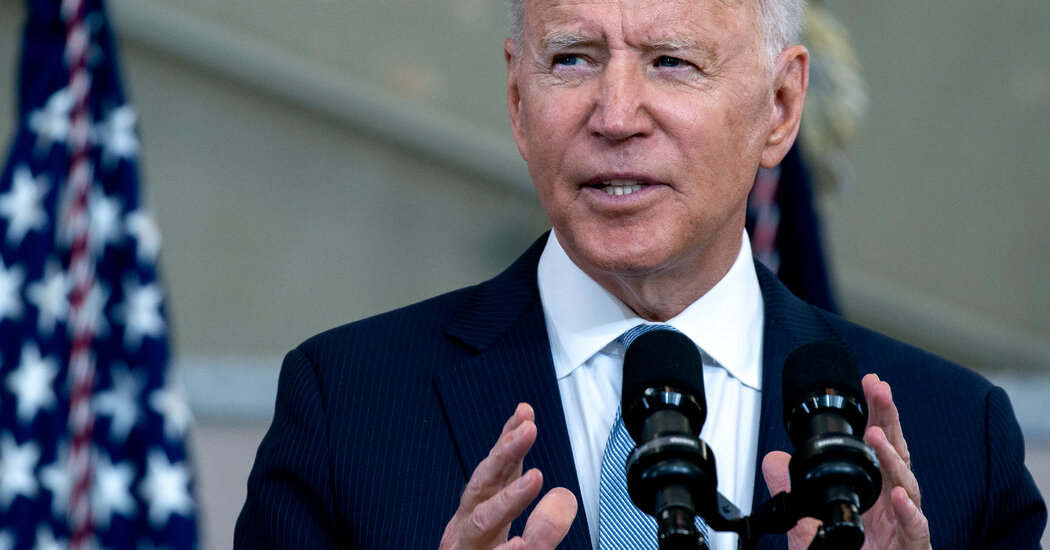 ‘Have you no shame?’

In an impassioned speech in Philadelphia, President Biden described the fight against restrictive voting laws as the “most significant test of our democracy since the Civil War,” and called Donald J. Trump’s efforts to overturn the 2020 election “a big lie.”

“Help prevent this concerted effort to undermine our election and the sacred right to vote,” the president said. “Have you no shame?”

The partisan fight over voting rights is playing out nationwide. About a dozen Republican-controlled states passed laws this spring that restrict voting or significantly change election rules. A group of Texas Democrats has fled to Washington in an effort to legally delay Republican state lawmakers’ effort to take up restrictive voting measures.

Analysis: Democratic leaders have no evident way to stop the Republican-backed laws — but the effect of those laws remains somewhat uncertain, David Leonhardt writes in The Morning newsletter.

In Washington: Two Democrat-led bills aimed at expanding voting rights nationwide are languishing in Congress. Biden has bucked increasing pressure from Democrats to endorse pushing the legislation through the Senate by eliminating the filibuster.

Republican response: In a statement, the communications director for the Republican National Committee said that the president’s speech had amounted to “lies and theatrics.”

Dozens of people have died in a blaze so intense that at least 22 bodies could not be immediately identified, after an electrical short caused oxygen canisters to explode at the Imam Hussein Teaching Hospital in the southern city of Nasiriya.

Witnesses described how fire trucks had run out of water and volunteers had desperately tried to pry open a padlocked door. People on ventilators could not move or leave, but staff members were able to escape. Most of the victims were patients.

The lack of precautions and the hospital’s feeble ability to fight the fire reflected a country in deep crisis. Years of corruption and government mismanagement have gutted basic government services across Iraq.

Government response: Iraq is battling a third wave of coronavirus infections, with more than 17,000 deaths since the pandemic began. After the fire, Prime Minister Mustafa al-Kadhimi ordered the detention of the provincial health director, the civil defense chief and the hospital director.

Background: In late April, more than 80 people died in a similar fire at a coronavirus hospital in Baghdad. Iraq’s health minister at the time resigned in response.

At around 1 a.m. on Tuesday, the Russian group REvil, which is short for “Ransomware Evil,” suddenly vanished from the dark web, just days after President Biden demanded that President Vladimir V. Putin of Russia shut down ransomware groups that have attacked American targets.

REvil is believed to be responsible for the attack that brought down one of America’s largest beef producers, JBS. The group also took credit for a hack that affected thousands of businesses around the world over the Fourth of July holiday.

While the disappearance of the hackers’ online presence was celebrated by many who see ransomware as a critical threat to national security, it left some of the group’s victims in the lurch, unable to pay the ransom to get their data back and get their businesses running again.

Three theories: The U.S. Cyber Command, working with domestic law enforcement agencies, could have brought down the group; Russia could have done so as well. Alternatively, REvil might have decided that the heat was too intense and taken itself down. Experts say the group could reappear under a different name.

A mural of the English athlete Marcus Rashford was marred by racist slurs after England lost the European soccer championship to Italy.

But as news of the vandalism spread, one act of racism was met with hundreds of messages of pride and love. Within hours, a collage of hearts, England flags and letters addressed to Rashford covered the paper that had been used to hide the graffiti.

Snubs and surprises at the Emmys

In a year in which audiences stayed home and watched a lot of TV, the Television Academy rewarded streaming services in a big way in nominations for the 73rd Emmy Awards. Here’s the full list of nominees and a few shockers among the nominees.

A new playing field: The competition was more open than usual, because the pandemic pushed back new seasons of some of last year’s most nominated shows, like “Insecure,” “The Marvelous Mrs. Maisel” and “Succession.”

Decline of broadcast: Only one nominee for best comedy — ABC’s “Black-ish” — was from a cable or broadcast network, while the most nominated shows were all from streaming platforms: Netflix’s “The Crown,” which dominated the acting categories, and the Disney+ shows “The Mandalorian” and “WandaVision.”

A first: Mj Rodriguez of “Pose” became the first trans person to land a nomination in a lead acting category.

Critics weigh in: My colleagues James Poniewozik and Margaret Lyon discussed the oddly persistent acclaim for “Emily in Paris,” whether “Hamilton” really needs any more awards and a bit of justice for Michaela Coel’s powerful series “I May Destroy You.”

Twitter Suspends Some Fake Accounts It Verified By Mistake

Twitter Suspends Some Fake Accounts It Verified By Mistake