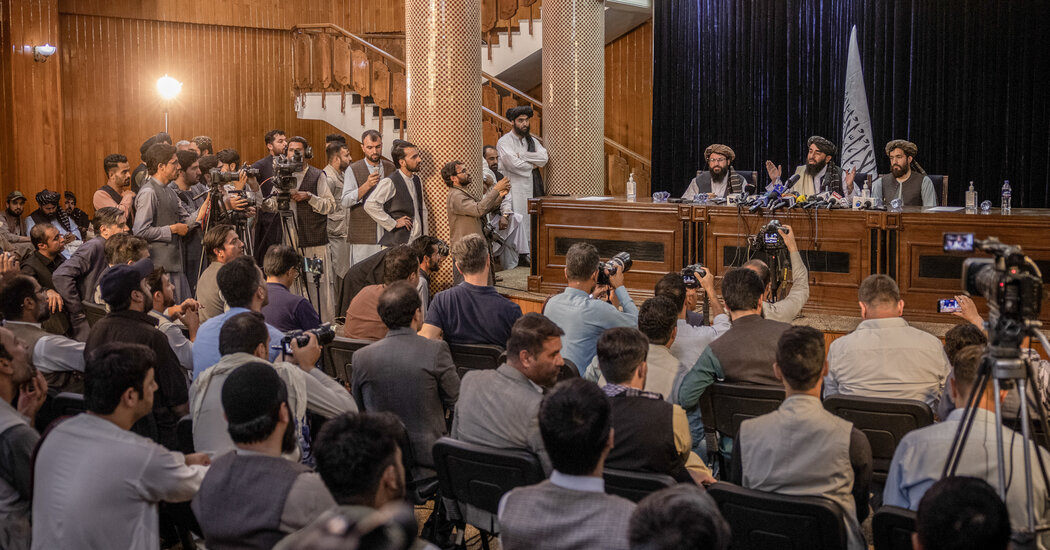 Reassurances and warnings from the Taliban

Taliban leaders provided assurances online and to the news media that they would not carry out reprisal killings or seize property after their takeover in Afghanistan. But there were ominous signs that their promises did not match the situation on the ground. Here are the latest updates and scenes from Kabul — and an overview of the group and its history.

At the Taliban’s first news conference, a spokesman said they would allow women to work and study — but “within the bounds of Islamic law.” Despite this more moderate front, Afghan women expressed deep anxiety as they try to assess their future under Taliban control. Millions are afraid of a return to the repressive past, in which women had few opportunities or freedoms.

Classified reports from American spy agencies leading up to Kabul’s collapse had painted a grim picture of the prospect of a Taliban takeover of Afghanistan, even as the Biden administration said publicly that the takeover was unlikely to happen imminently.

From Opinion: Malala Yousafzai, who survived a Taliban assassination attempt in Pakistan after speaking out about her right to go to school, writes, “Like many women, I fear for my Afghan sisters.”

Resettlement: Britain and Canada announced that they would each take 20,000 Afghan refugees who had fled the country. Sweden said it would divert aid from Afghanistan so that it would not contribute to Taliban rule.

View from abroad: Afghans who have settled in the U.S. in the past two decades described anguished conversations with family members and the piercing fear that the Taliban might retaliate against their relatives.

News analysis: The desperate scenes at Kabul’s airport will now give Afghanistan a place in America’s national memory as another failed attempt to reshape a far-off land.

At least 1,941 people are dead, and 9,900 injured, after a 7.2-magnitude earthquake in Haiti over the weekend was followed by the arrival of Tropical Storm Grace, which soaked survivors as they struggled to keep safe in makeshift shelters.

The storm has complicated an already tenuous earthquake relief effort, disrupting an air bridge run by humanitarian groups and the U.S. Coast Guard between affected areas of southern Haiti and the capital, Port-au-Prince.

Efforts to recover victims of the quake have been slow and have been hampered further by heavy rain, which had largely stopped yesterday. People in afflicted areas searched for loved ones and supplies and tried to get aid from humanitarian groups. Many had sought refuge in the few public buildings spared by the quake.

Quotable: “In a situation like this, you feel you’re powerless,” said Abiade Lozama, an Anglican archdeacon based in the south of the country. “Many people are in need, and there’s nothing you can do.”

Breakthrough infections in the U.S.

With the arrival of the highly contagious Delta variant, Covid-19 hospitalizations and deaths among vaccinated Americans may also have increased, according to preliminary figures from seven states.

In six of those states, breakthrough infections in vaccinated people accounted for at least one in five newly diagnosed cases, according to figures gathered by The New York Times. Absolute numbers remain very low, however, and there is little doubt that the vaccines remain powerfully protective.

The figures come as Biden administration officials plan to recommend that most Americans receive coronavirus booster vaccinations eight months after their second shots. Health workers hope the boosters will help relieve overwhelmed Covid wards — one in five intensive care units in the U.S. has nearly every bed occupied.

The heirs of Edvard Eriksen, the artist who created the “Little Mermaid” statue in Copenhagen, are taking a Danish village of 1,200 people to court over a similar statue.

While Copenhagen’s mermaid is bronze, the village of Asaa’s version, above, is carved from granite. The Asaa mermaid is also plumper, her facial features coarser, though her posture is the same. “How else is she going to sit?” asked Mikael Klitgaard, the local mayor. “She’s a mermaid. You can’t put her in a chair.”

Maki Kaji, the “Godfather of Sudoku,” died at his home in Tokyo. A university dropout, he turned a numbers game into one of the world’s most popular logic puzzles.

Art of the beautiful game

OOF is a new gallery dedicated to art about soccer, in a building attached to the Premier League club Tottenham Hotspur’s stadium gift shop in London. Its opening show, “Balls,” features 17 pieces of contemporary art made using soccer balls, or representing them. There’s one made out of concrete, and another in silicon that looks as if it’s covered in nipples.

The worlds of art and soccer don’t necessarily mix, reports Alex Marshall. The best-known recent work that combines both is a bust of the Portuguese player Cristiano Ronaldo that made headlines for its poor resemblance to him. Other pieces, like Andy Warhol’s acrylic silk-screens of Pelé, are little more than simple tributes to great athletes.

Eddy Frankel, an art critic and a co-founder of the gallery, said he wanted to show that art about football, as soccer is known in Britain, could be exciting, complex and thought-provoking.

“We’re using football to express ideas about society,” Frankel said. “If you want to talk about racism, bigotry, homophobia, or if you want to talk community and belief and passion: All of that, you can with football.”