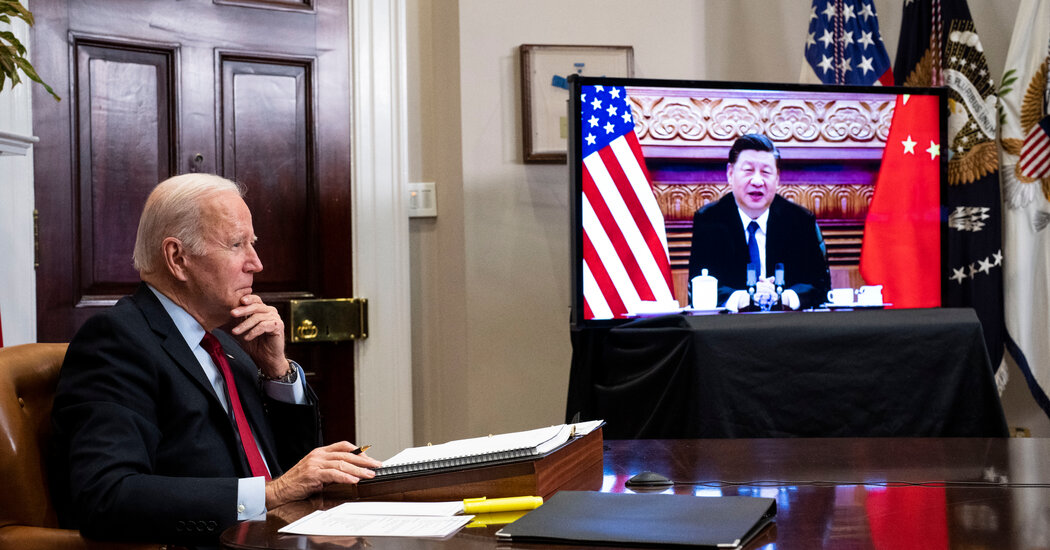 We’re covering the takeaways from the Biden-Xi meeting and how Pfizer’s Covid pill could help poor nations.

Polite words, not much more

A virtual meeting between President Biden and China’s leader, Xi Jinping, produced no breakthroughs. The two leaders sought to keep the many disputes between their countries from escalating into a broader conflict.

At the end of three and a half hours of talks, the two sides did not even cobble together a joint statement. Instead, they issued their own statements, each emphasizing the points of longstanding contention.

Xi, according to China’s own readout, said that American support for Taiwan was “playing with fire,” and explicitly warned that the world risked slipping back into the superpower confrontations of a half-century ago.

Lingering issues: The trade war that former President Trump started remains unresolved, and China is not buying as many American products. U.S. officials declined to discuss what was said about China’s growing nuclear arsenal.

More talks: The two sides did agree to talks among lower-level officials, raising hopes that tensions could ease at least a bit.

Xi’s power: Hours after the meeting, the Chinese Communist Party finalized a resolution that anoints Xi one of its revered leaders.

The agreement follows a similar one by Merck, and together the deals have the potential to vastly expand global production of two simple antiviral pills that help prevent severe illness from the coronavirus.

The pill is urgently needed in places where few people have had the opportunity to be vaccinated. Advocates for health equity said that the Pfizer deal did too little to address the crisis that has been created by the huge disparity in vaccine access.

The U.S. is planning to pay more than $5 billion for a stockpile of Pfizer’s new pill, enough for about 10 million courses of treatment, after the company gears up production next year, according to people familiar with the agreement.

Challenges: The impact of the pills from Pfizer and Merck will depend on whether patients have easy access to Covid testing. The treatments must be given within a few days after symptoms start. Experts predict that will be more difficult in countries where people have less reliable access to health care providers.

Polish border guards said they were repelling an attempt by migrants on Tuesday to breach the heavily guarded border with Belarus, where tensions have been building for weeks.

The authorities in Poland said that the guards at the border crossing had been assaulted by people throwing “stones, bottles and logs” and firing “stun grenades.” (With journalists barred from the area, it was impossible to confirm the Polish authorities’ claims.)

Russia’s foreign minister, Sergey Lavrov, called the actions of Polish forces “absolutely unacceptable.” Moscow has stood by Belarus amid accusations that it is using migrants as a political weapon against Poland, an E.U. country.

On the other side of the border, Belarusian guards began moving hundreds of migrants from the fetid and frozen camp to the shelter of a nearby warehouse. It was unclear what plans the Belarusian authorities had for the migrants they were moving.

Humanitarian crisis: At least 11 people have died at the border in recent weeks. As freezing temperatures begin to grip the region, there are fears of further tragedy for thousands of men, women and children stranded at the border.

Fifteen generations of the Indigenous Abrauw group in Indonesia have lived on Biak Island. Now, the group’s members fear they will be forced off their land as Indonesia pursues plans to build a spaceport there and lure the SpaceX founder Elon Musk.

Last week, Taylor Swift unveiled “Red (Taylor’s Version),” her latest rerecorded album. First released nearly a decade ago, “Red” signified the beginning of Swift’s transition from country to pop. And among true Swifties, the favorite track was “All Too Well,” an “achingly rendered portrait of a breakup,” Lindsay Zoladz writes in The Times. (There is much speculation about the actor rumored to have inspired the song.)

So when Swift debuted the music video for a new 10-minute version of “All Too Well” — and performed the entire song on “Saturday Night Live” — fans went wild. While the shorter version of the song featured “taut, streamlined storytelling,” Zoladz writes, the new version is “gloriously unruly and viciously seething.”

Swift began the rerecording project to keep control over her songs, after her first six albums were sold to investors. It is a shrewd business move: The rerecorded songs are outperforming the originals on streaming services, The Wall Street Journal reports.

But the extended cut of “All Too Well” shows how the rerecordings can also enhance the original works. The most striking lyric in the new track highlights the age gap between an older man and a younger woman, and the video emphasizes the point with actors who are more than a decade apart. The result, Zoladz writes, is a young woman’s attempt to retroactively correct a power imbalance.