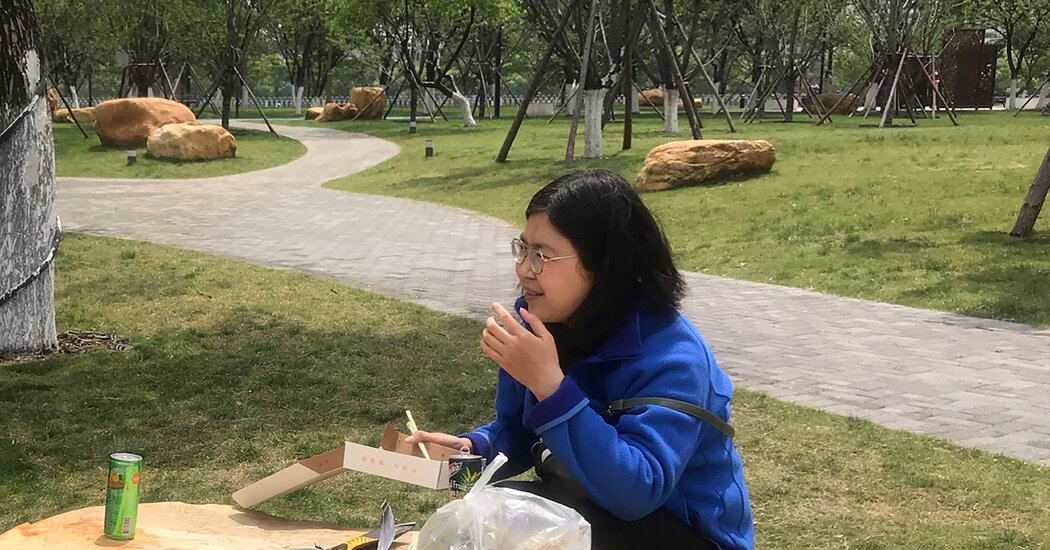 A Chinese citizen journalist who was imprisoned for exposing the failures of the government’s initial response to the coronavirus outbreak in Wuhan is seriously ill from a hunger strike, according to messages from her family shared by her former lawyer and a friend.

The journalist, Zhang Zhan, 37, had traveled to Wuhan from her home in Shanghai and spent the early days of the outbreak documenting the city’s strict lockdown and the severe impact it had on residents’ livelihoods and freedoms.

Ms. Zhang’s reports challenged the government’s efforts to portray its response as competent and caring. She was convicted last year of “picking quarrels and provoking trouble,” a vague charge often used to target dissent, and sentenced to four years in prison after a three-hour, closed-door trial.

Ms. Zhang began a hunger strike after her arrest in May of last year. Her lawyers previously said that the authorities had used a feeding tube to feed her and restraining her hands. Her mother, Shao Wenxia, described it as a “partial hunger strike,” with Ms. Zhang eating fruit and cookies but not meat, rice or vegetables.

The journalist appeared at her trial in December in a wheelchair, and one of her lawyers said then that she had already lost significant weight and that her appearance had vastly changed from just a few weeks earlier.

Ms. Zhang, who is 5 feet 10 inches tall and weighed about 165 pounds before her arrest, now weighs less than 90 pounds, according to a message Ms. Shao sent to her former lawyer, Zhang Keke. He shared the message with The New York Times.

Ms. Zhang’s mother has not been able to see her in person since her arrest because the authorities have refused to let her visit, Mr. Zhang said. Ms. Shao said in the message that her daughter was hospitalized on July 31, and that her family was permitted to speak with her by phone on Aug. 2. She returned to prison on Aug. 11.

“She still insisted that she is not guilty, and will not eat regularly,” Ms. Shao wrote. Ms. Zhang was suffering from a gastric ulcer and was so weak that she needed help getting up, her mother said in another message to Mr. Zhang. Ms. Shao could not be reached for comment.

An official at the Shanghai Prison Administration Bureau, when reached by telephone on Tuesday, confirmed that Ms. Zhang had returned to Shanghai Women’s Prison after receiving medical treatment, but declined to answer further questions about her condition.

Thus far, Ms. Zhang has not responded to pleas from her family to resume eating normally.

“Our first hope is that she can stop her hunger strike,” said Peng Yonghe, a Chinese lawyer and a friend of Ms. Zhang’s. “Second, we hope that she can come out as soon as possible.”

Mr. Peng cautioned that it was unlikely that Ms. Zhang’s condition would lead to early release. While the Chinese system does allow for medical parole, conditions brought about by a hunger strike would not qualify, he said.

Human rights activists have raised fears that if Ms. Zhang’s health does not improve she could share the fate of other Chinese dissidents who have died in custody.

“She might actually die in prison,” said Wang Jianhong, who directs the U.S.-based rights group Humanitarian China. “It is not groundless because we’ve seen so many previous examples.”

Cao Shunli, who had demanded that an official human rights report that China submitted to the United Nations include citizen voices, died of a lung infection in 2014. Her family said she had been denied timely medical treatment. Liu Xiaobo, who won the Nobel Peace Prize while in prison, died of liver cancer while under guard in a hospital in 2017.

Ms. Zhang had declined to appeal her conviction, telling her lawyers that she refused to acknowledge the validity of the legal process used to imprison her.

She was the first citizen journalist tried for challenging the official narrative of China’s pandemic response. Others including Chen Qiushi and Li Zehua were detained and reportedly later released, although Mr. Chen appears to be under surveillance. The whereabouts of another, Fang Bin, remains unclear.

News outlets in China are strictly controlled by the government, and social media platforms like Weibo censor sensitive subjects. But in the early days of the pandemic, when the authorities were distracted with controlling the outbreak, some citizen journalists, working independently, chipped away at the official narrative of a heroic response.

While in Wuhan, the city where the coronavirus first emerged, Ms. Zhang posted videos that showed how the outbreak had overwhelmed a hospital and a crematory. She showed how the city’s severe lockdown had forced businesses to close and driven the prices of vegetables up.

After a city official said residents should be taught how to properly express their gratitude to the government, she interviewed people on the streets about whether they felt thankful.

In what turned out to be her last video before her detention, she criticized what she saw as unduly harsh means of enforcing the lockdown on Wuhan.

“The government’s way of managing this city has just been intimidation and threats,” she said. “This is truly the tragedy of this country.”